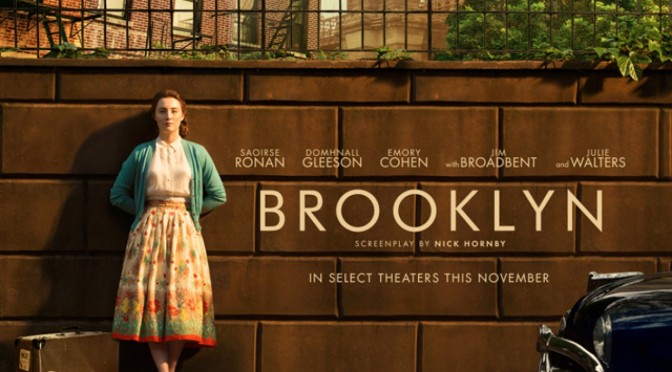 Simplicity isn’t something I demand when it comes to films. One reason being I prefer films that offer plenty for me to analyze either on a technical, or narrative level. Another reason being when it comes down to it simple stories, and simple characters are easy to fully comprehend on one viewing. Leaving very little to ponder once the film ends. Sometimes offering no reasons to rewatch a simple film in the future if I understood everything I wanted on a single viewing. At the same time it’s a necessity to have simplicity in films because not every great story, and masterpiece needs complexity. I would much rather have films like Whiplash which while not an amazing viewing experience soars in accomplishing its single minded goal as opposed to something that collapsed under its own weight. Brooklyn I would place alongside with a film like Whiplash; both films didn’t provide anything amazing of an experience from the reception they received, but they accomplished what they set out to do with little to no hiccups.

Brooklyn is about an Irish immigrant, Ellis (Saoirse Ronan), who lands in 1950s Brooklyn, where she quickly falls into a romance with a local while being torn up between two countries she loves. The film is a simple mixture of coming age, and romance that doesn’t get elaborate. It follows a simple three act structure, and is linear as a film can traditionally get. What differentiate it from a traditional romance film is nothing in the film is overly dramatize. Conversations feel natural with dinner scenes serving to get across the passage of time without directly stating it. These dinner scenes also provide the films with most of the jokes as well as some insight into some it characters. Everything in the film is written to get across the most amount of information with simple dialogue. Working wondrously for the film.

The romance isn’t the main focus of the film, but rather use as a narrative tool to show growth in Ellis life. Showing Ellis as young timid girl to eventually becoming an adult woman. Her interaction with her love interest, Tony (Emory Cohen), changes her as a person, and seeing those changes is what makes the romance effective. Much like Ellis, Tony feels like an actual person expressing the kind of life he desires with Ellis. In his own understated way contributes more to the film than just being a love interest. Another appealing aspect of the romance is how it portrayed. There’s no flair to any of it. One example of this is when Tony confesses to Ellis he loves her, and the scene is neither accompanied by music, nor characters making a big deal out of it. Simply being treated as another part of the relationship. Granted a love confession in serious relationship is significant, but the way it written it intently wants the audience to know every moment between these two is significant no matter the context.

As a coming of age film it has the message of growing up is filled with hardship, but an added bonus is actually seeing the character growth in the film. It does not end when Ellis experience a life altering event by moving to 1950s America. The film instead uses the opportunity of Ellis growing to make her face a serious dilemma. Viewing the conflict she face with in a new light as oppose in the beginning of the film where she viewed it like a young adult simply going along with what everyone else wanted. It’s also very clever how it uses a one off character within the first act of the film to be a fulfilling showcase of far of a person Ellis came in her journey. In terms of a tone it plays out a bit like a fantasy before the third act where reality comes crashing down. While there is the issue of living in an entire country feeling homesick, and trouble socializing it never overcomes Ellis life. She is simply able to deal with her problems directly. If not, then she’ll asks her friends, or family for advice.

If there is any serious issue with the film writing it would be the climax of the film. Once Ellis has to decide to live in Ireland with a newfound purpose, or go back to the US to a life that helped her transition into adulthood. The catalyst, or motive that determines Ellis decision feels tacked on plain, and simple. Throughout the film, it makes an attempt to make both 1950’s America, and Ireland as desirable places to live without any serious problems that is too much to handle. However, after a conversation with someone Ellis didn’t like in her past it reminds her of everything she hated that particular country. Here lies the simple problem of the audience not knowing what Ellis specifically means. This film starts out with Ellis spending her last day in Ireland before going to America, and that’s honestly all the viewer is given on Ireland. She experience similar events in both the US, and Ireland. Viewers only gain a full understanding of how much the US means to her as oppose to Ireland where it comes across as a repeat of what Ellis experienced in America. However, like the rest of the film, this is an understated moment that does not dramatize the climax “movie moment” kind of way. The same applies to the ending. While subtle in showing how much Ellis grew as a person it is also understated. Everything about the is simple to comprehend, and in a understated execution succeeds in what it tackles.

Much like the screenplay by Nick Hornby, the acting is once again understated, but for simple reasons. None of the performances are powerhouses, though they’re all fine because of the film’s direction. Saoirse Ronan takes leading the role as Ellis portraying in one of her most challenging role. She comes off as awkward, naive, sincere, funny, and other shades of her character. What is best about this performance is how steadily she transition into becoming an adult. It’s a steady change that retains her character established traits with a new boost of confidence. She expresses through her performance how much she matured, and her facial expressions gets it across vividly. There is a not a scene in the film where you’ll be impressed by her acting since the entire film is subdue in emotion. Taking a timid woman at the start of the film, and convinces viewers she’s now a strong individual. Still, it’s another noteworthy performance from Saoirse Ronan who doesn’t have to put up a fake American in this film which is another plus.

The other performances are overshadowed by Saoirse Ronan. Of course it’s because she the leading actress, but there’s rarely a scene where she’s not present. Only Emory Cohen gets the most of amount of screen time of the supporting cast. His performance is also sincere, and very believable in his performance. The moments he shares with Saoirse Ronan are sweet. They’re both good onscreen together. Acting veterans like Jim Broadbent, and Julie Walters aren’t utilize much in the films. Walters can deliver a funny line, but with the exception of one scene she’s mostly spent her time in the dinner scenes with some kind of reference to god. Jim Broadbent is in the film less so since his only purpose seems to be to deliver a plot point to get the story rolling. He doesn’t get to do much in the film, but doesn’t takes it seriously nonetheless to not be a distraction. Then there’s Domhnall Gleeson who only appears in the third act. His chemistry with Saoirse Ronan makes it possible to believe why Ronan character can like him, even if they spent less time together.

Supporting actors like Hugh Gormley, Brid Brennan, Maeve McGrath, Emma Lowe, Barbara Drennan, Fiona Glascott, Jane Brennan, Eileen O’Higgins play typical characters. Being used mostly to portray the nice old lady, the woman who has trouble maintaining relationship, the depressed mother, the irritable old woman, and other archetypes. As you might have imagined none of these archetype are exaggerating the personality. Director John Crowley doesn’t miss anything when it comes to details in the costumes, and showing visually showing good distinction between two countries. Yves Belanger cinematography is visually the most interesting part of the film. Offering some standard wide shots, but it’s at it best when it comes to showing the most out of its actors performances. Music is composed by Michael Brook offering a classic sounding soundtrack to the film, and having some Irish music. John Crowley is smart enough to know when to place music, and when not too.

Brooklyn is a film that will leave viewers conflicted at the raving reception it received. While in no way close to resembling a bad film it’ll nonetheless contribute to disappointment by its many raving reviews that it receives. This will make some viewers expect something grander than what they will actually see. On the contrary, if you want a coming of age, and romance that is more down to earth than Brooklyn is the film for you. It’s has sweet moments of romance without being sugarcoated. Has the ability to gripping without over dramatizing any events. By all, it’s a simple film that knows how to tell a simple tale without many layers on it, and when it works nearly this flawlessly it doesn’t have to be more than it is.