On the third day on my journey to Christmas, instead spending a few paragraphs writing about a single anime I don’t have a topic for I’ll do a listicle. My habit of spontaneously choosing random anime paid off this year. Ending up viewing way more anime I liked this year than I did in the past two years I’ve been watching anime. Here five of those that I didn’t expect much from, and manage to fall on my good side.

In around November, or December of 2017 I read the manga of Angelic Layer by Clamp since I wanted a good shoujo read. I liked the manga of Cardcaptor Sakura so why not do the reverse this time, and check out the manga first. Details about the manga escape me because it’s just that uneventful. The premise follows a little girl by the name of Misaki Suzuhara taking an interest in the battle dolls game Angelic Layer. After she learns the rope of playing it in the first couple of episodes it’s just a battle tournament for the entire series. Reading chapter after chapter made me bored since it was just a series of fights with little else going on.

The anime adaptation by Bones follow the general storyline of the manga, but attempts to flesh out the characters more. It’s an addition I don’t mind to the anime since it helped the romance side developed more naturally than it did in the manga. It also gave side character Kotarou, and Tamayo more to do than just being there to support Misakai. I liked how the anime gave them a conflict figuring out their feelings for each other which is something the manga didn’t have. There was much appreciated attempts to make the rise in Misakai skill appear more natural than just being godly like in the manga.

Another thing the anime did was have episodes dedicated outside of the tournament. In the manga it virtually just a series of tournament matches doesn’t make for a engaging read. I appreciated the detour the anime took, and the attempt made to provide more background to side characters. It was nice seeing the contestants outside of a tournament environment just to act like normal people instead of the obsessive Angelic Layer freaks they are! My favorite anime exclusive moment is a spoiler, but it’s on a Ferris Wheel with Ichiro, and Misakai mother. It was a sweet moment lacking in the manga, and also funny.

I would have prefer Bones taking more drastic measures in attempting to remedied some of the other issues with the manga. My biggest one being Misakai is overpowered, and despite being a newb goes through opponents one after the other. It minimizes the “stakes” of these matches when more experience players keep losing to the almighty newb Misakai Suzuhara. Although, I didn’t like the changed outcome in the final round. Sure it had different meanings in both tellings of the same story, but the outcome in the manga makes sense whereas in the anime it just doesn’t.

There’s also the absurd amount of love Angelic Layer gets within universe. It’s comes off very silly how seriously, and affectionate some of these people are to Angelic Layer. In spite of that silly aspect that’s also part of the charm the anime creates that the manga didn’t capture like it wanted. Also, Misaki Suzuhara is adorable. It gets an extra point for that. 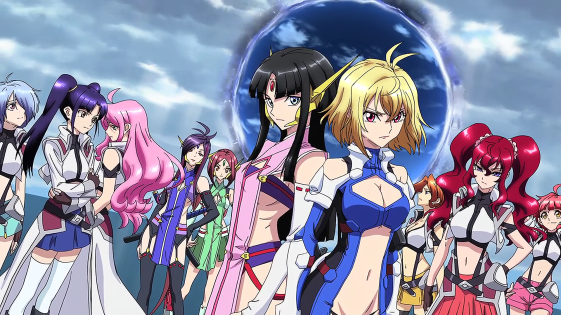 Yes, I enjoyed Cross Ange. I know won’t hear the end of this on the many Discords I’ve been invited too. There’s scarcity of anime that fall into the so bad it’s good category. Almost every time I try to watch one of these type of animes they end up with me hating it Cross Ange ticks all the boxes in the same way something like Dark Cat, and Mad Bull 34 (I have make a post about that someday) did for me. They had portions of questionable writing that just had me bursting with laughter.

In the case with Cross Ange it was some of the dialogue. Oh boy, I can’t tell you how much me, and brother (who I saw this anime with) lost it in laughter when Embryo said “Abandoned everything, including your clothes!”. That’s a classic quote if I ever heard one. Another one I liked was from Ange telling Tusk “Loot at me, I’m filthy. I don’t deserve you!”. Ugh, I expect this kind of dialogue in crummy romance novels not a anime with Dragons, mechas, time travel, and lots of fanservice.

I wouldn’t call Cross Ange a good anime per se. At most, I would call it a solid series with a questionable fanservicey presentation going against many of its serious themes. The first half of the anime dedicates an entire episode to Hilda doing petty things like stealing Ange’s underwear for payback, and Hilda later on has a very dramatic episode meeting her mother in the first times in years. They just don’t mesh well together.

Don’t even get me started on the Dragons, time traveling, parallel dimensions, God, specicism, and mechas all of which varies in results. I do feel some of the writing in Cross Ange is competent like Salia accepting the fact that Ange is naturally better than her, and how she’s unable to accept that. Though me, and my brother refer to her as loser whenever we talk about this anime I did feel Salia was somewhat well handled. Unlike the character of Vivian who without warning got a bigger part in the series as it went on. Also, Vivian reuniting with her mother left me emotionally void for I felt nothing in that moment. Is it too much for Cross Ange to a breather on the amount things it tries to cram into 25 episodes.

One aspect that goes underappreciated is the music in this anime. It is surprisingly good My favorite is a insert song called “Towagatari Kaze no Uta” sung by Yui Horie. I liked it enough to have in my collection. It’s not for everyone just like the next entry.

Yes it’s a Korean production, but if other anime list type sites consider it an anime so will I. The appeal of Satellite Girl, and Milk Cow won’t be it’s animation. It’s jenky with its 3D animation sticking out with the sometime good, and sometime bad 2D animation. What the average person will take away from this movie is how weird it is. So you have a Satellite who falls in love with a human, a dude who turns into a Cow because of a broken heart, and Merlin the magical talking toilet paper.

This odd mixture of jenky animation, strange characters, and a odd story come together to be charming in a way. From the onset, it’s clear the animators behind this are trying to entertain the audience as their sole goal. Be it with odd occurrence in the story like a Satellite kissing a talking Cow, or a Incinerator having a bout with a sentient toilet paper. Kinda hard for me to be bored with this kind stuff happening in the movie.

Other than being weird the story is decently handle. I feel like a slightly longer runtime would have helped flesh out the romance. The movie is barely over 81 minutes so it doesn’t exactly take things steady. However, that also mean the strange allure goes away before becoming distracting. 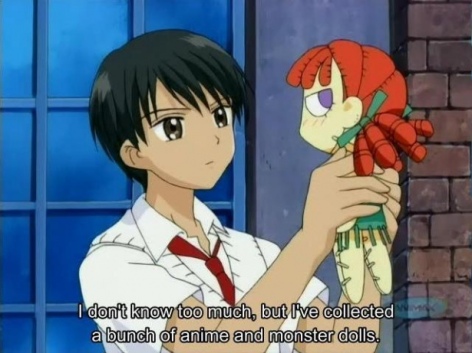 I can’t remember how, or when I discovered the shoujo comedy anime Ultra Maniac. I’m certainly glad I did though. Back in the beginning of the year when I started the first episode it left a strange impression on me. The animation looked dated, the English dub seemed off, the characters were pretty typical, and it technical aspects all seemed weird to me. However, I was taken aback by the ending of episode when out of nowhere Nina’s father appears shouting at Nina. This was so unexpected that I burst out laughing in confusion in what I just witness. It would have ended their, but I knew this first episode was something I needed to show my brother, and he too was fascinated by it oddity too.

As I continued to watch Ultra Maniac with my brother we never found ourself bored with the anime. Every time we checked it out every episode had something memorable in it. It didn’t matter how odd it was, but what matter to us was it shaping out to be something good. Like the last entry on this list, it tackle romance in a way its intended audience can relate to. Dealing with unrequited, how one’s emotion can reach whoever their affectionate for, all the while being a coming of age story. Progressing nicely in turning one dimensional characters like Maya who was initially just the rival character into someone with more to them.

The story sense of humor was easy for me to get into either because of the strange situations the cast would get into, or the supporting cast reaction to what strange thing was happening in the episode. I don’t feel Ultra Maniac does anything outstanding in any regard since its fluffy entertainment through and through. Sometimes a series like this that’s just filled with good intentions, and effort is all I need to unwind after a long day of work.

Okay, so this is a late addition to the post since I finished it recently so I’ll make my thoughts on it brief. I decided to check Kamisama Kiss after reading Karandi James of 100 Word Anime review for it. Unlike the rest of my entries, this one is actually a romance comedy, and does those two things better than everything else I mentioned. Seeing the relationship develop between Tomoe, and Nanami grow is the best part of it. Dealing with aspect of love in a way that doesn’t feel melodramatic. The progression of it as both Nanami, and Tomoe figure out how to exactly sort out the feelings they have for each other prevents the relationship from being stale. There’s something about Nanami being a god, and the responsibility of it, but that doesn’t play a significant in season 1. I’m not really one for romantic comedies, but this one very good to me!

Out of all these animes I would mostly recommend you check out Kamisama Kiss since it’s the best one here. However, you can’t go wrong with any of these other ones since I’m sure you’ll have some degree of fun with them.

Wow, this ended up a lot longer than I expected it to be! I only intended to have two brief paragraphs detailing what I liked about each of of these animes. Apparently I had more to say about some of them than I thought I did. Luckily the next couple of days in my journey to complete the 12 Days of Anime are more or less planned out in my head. I’m hoping I could finish these two character appreciation pieces I have in mind on time just to shake things up a bit. We’ll find out in the coming days if I can pull it off. Until that time arrives, see you around tomorrow!