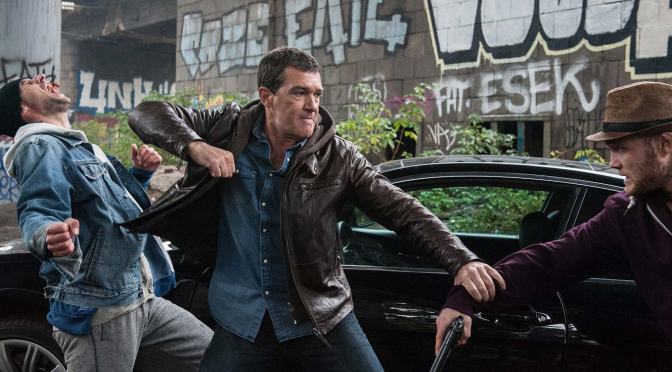 Direct to video action movies is an odd beast. You’ll get the familiar faces pass their heyday in Jean Claude Van Damme, Steven Seagal, and Dolph Lundgren being regulars in this market to moderate success. It also seems to be a marketplace where if anyone wants to be an action star, even for a single movie they’ll get one, including Miley Cyrus in So Undercover (2012). It’s also a place where plenty of competent directors are unable to make it to the big leagues. One such director is Isaac Florentine, a man who has a strong eye for action scenes regardless of budget. In particular his fight scenes tend to be the standouts of his action movies. Much like Antonio Banderas who stars in this movie, Isaac Florentine is capable of more, but both become a victim of limitations.

Acts of Vengeance centers around fast talking attorney Frank Valera (Antonio Banderas) bringing justice into his own hands when his wife, and daughter are murdered. Starting with a quote from Marcus Aurelius Meditation before showing us Frank fight in the kitchen of a restaurant is a flash forward. When you see Frank strangling someone he asks the audience “Do you think I’m crazy”, and goes back to the beginning. Immediately you’re told factoids about the average amount of words people say in a say a day; women speak 23,000 words, men 17,000 words, and Frank Valera speaks 80,000 words in a single day. Doing the math that means Frank speaks on average for 22 hours, 13 minutes, and 20 seconds in a 24 hour day every single day according to him. Unless Frank talks in his sleep that factoid feels just slapped on without much thought given to it. All just to simply get across there’s only three meaningful words he uses every day, and yes the words are I love you.

That’s just a hint of the very blunt characterization in this movie ignoring the rule of show don’t tell. After the death of his love ones you’ll get Frank moping around before he miraculously picks up Meditation by Marcus Aurelius when trying to cover his stab wound. Despite all the blood it is covered in, he decides to read the book, and it changes him 36 minutes in the movie by taking a vow to remain stoic until he avenges his love ones. The transformation is where the film begins to fall apart, mostly because Frank’s narration would tell you what he’s feeling instead of showing it. More baffling with the fact you’ll have quotes from the book on screen whenever it goes into a new chapter. These quotes are clear in their meaning, yet are undermined by the narration as well.

A majority of the movie remains grounded which is why you’ll hardly see Frank fight anyone in the movie. Frank does become proficient in martial arts, but doesn’t get into trouble frequently. This comes at the cost of logic in several places of the story. Some of them including how the nurse who fixes up Frank doesn’t call the police, and according to Frank shutting up gave him super hearing. An ability use sparingly in the movie. Unlike Frank’s apparent telepathy because without saying a word everyone knows what Frank wants out of them. In terms of logic that’s easily the biggest leap this movie takes.

Other than Frank, the other characters just feel like plot devices to advance the story. There a few minor characters in the movie both of which are underdeveloped. Alma (Paz Vega) has a conflict about the Russian mafia wanting her to steal drugs for them, and not letting her go. This plot point is left unresolved since the closest thing to a solution that comes from this plotline is Alma staying with Frank at his house. She inexplicably decides to be very helpful to Frank even though they barely met, and why she didn’t call the police after fixing up Frank wound is never explained. There’s Strode (Karl Urban) who hardly appears in the movie, and has just little characterization. He’s only in the movie to be a plot twist that could have been shocking if he was developed.

Lacking on the characterization to make it more than a character drama, and there’s too little action to satisfy action fans. Ensuring viewers will experience a very conflicting movie. It understands its limitation so it succeeds in its simplistic storytelling. Things are clear cut, properly explained even if not resolved, develops in a good manner, and moves along in a nice pace never overstaying it welcome.

On the philosophy side of things this is not done correctly either. After reading Aurelius’s Meditation, Frank becomes motivated to take revenge. The last two lines from the book (well, going by the movie) are “The best revenge is to be unlike your enemy”, and “Accept the things to which fate binds you”. If Frank properly followed the words of Marcus Aurelius to heart Frank should have developed discipline for forgiveness, and accepts what fate has taken away from him. Being unlike your enemy would be forgiveness in this instance, and accepting your fate, but going that route wouldn’t make for an eventful action movie, although would have work fine for a character drama.

Before moving to everything else, there’s the expected funeral scene where Frank is mourning the loss of his wife, and daughter. In the only scene he appears in, Eric Alli who plays the grandfather just delivers the most in your face dialogue written in the movie. He just verbally gives a beating to Banaderas shoving it in his face another attorney like him would make sure if the criminal is ever found he’ll get off scot free. He also reminds Banderas he lost a daughter, and granddaughter because of him. This scene last around a minute, but it simply stood out because everything about it is so questionable to me, especially the performance of Alli. Oh yeah, there’s also the classic punching the mirror scene to display an outburst of inner turmoil, and a montage of Banderas getting training.

Antonio Banderas takes the lead with a passable performance. He’s a more capable actor than he actually displays in the movie. Having difficulty trying to portray the complexity of his character without the usage of words. Leaving Banderas to nod his head mostly either approvingly, or disapprovingly which isn’t exactly impressive. Even when Banderas does talk all his line delivery sound the same without much emotion express in them. Something odd to witness when he gives the proper facial expression, but unable to express it in his words.

Karl Urban who is hardly in the film is also passable. He plays his part in a straightforward manner leaving little room for him to do anything. Hardly appearing in the movie is also to blame for that. Paz Vega who appears in the second half is also passable. There’s not plenty of meat to her character so she just goes with the flow. The rest of the cast is passable. No one in the movie gets to shine because their time is either too brief, or just aren’t used properly.

Now we come to the action which is hardly here. You’ll get three decently length fight scenes, and that’s about it. One in the beginning, one in the middle, and finally one in the climax. With there being an average wait about 30, or so minutes making the action unevenly spaced out. This film isn’t a good showcase for Isaac Florentine eye for action, but there are two decent fight scenes in the movie. None of which are worth sitting through since they’re pretty basic fights with their choreography.

The climatic fight between Antonio Banderas, and Karl Urban is slightly spiced up because the environment they fight in gets used when Banderas takes a serious beating. Both should be commended for performing the fight sequence convincingly with Florentine expertly shooting the scene, and allowing for long takes for viewers to clearly see the actors performing the fight. There’s a little unnecessary usage of slow motion during half of the fights, but that’s a minor complaint. When it comes to storytelling his touch to the story occasionally come off overblown with the bombastic music not helping matters. It’s the only thing he could think off to do when limited by the fact his lead character doesn’t speak. With the narrations breaking the rule of show don’t tell in a negative way it’s overall just clumsily told.

It’s the same old song, and dance action fans have seen before. I just don’t have any strong feeling towards it one way or the other. Acts of Vengeance has more effort put into its story than your average direct to video action movies, but that comes off as a backhanded compliment. If it wasn’t for the needless narrations than it could have remedy some of my issues with the movie, but it also would have created new problems since Banderas didn’t overcome the stoic limitation. Neither did Isaac Florentine who wasn’t confident in how to tell his story. While certainly better than your typical direct to video action movie average is still average.