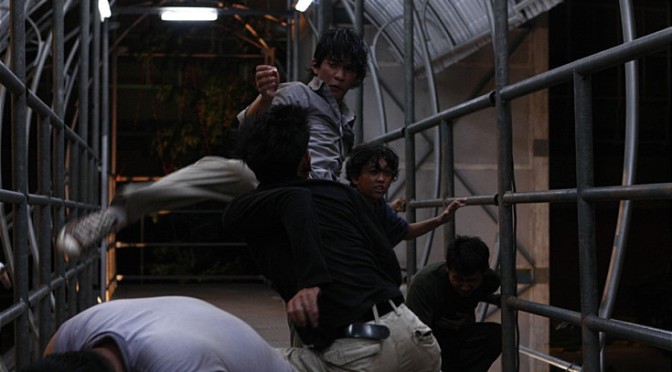 I have a spot for Merantau since it was one of the first movies I’ve ever reviewed. It’s an odd feeling for me to check out some of my old stuff from seven years ago, and seeing what changed over the years. In some areas I felt I got better, like better explaining positives, and drawbacks when it comes to a film’s writing. Other areas I can see what part of myself got lost over the years. The biggest one to me easily being how my offline activities affected my personality in my writing. Rarely doing the offshoot reviews where I simply poke fun of something while providing actual criticism in a entertaining manner. Reviews which actually got me to know some readers on a more personal level. What has remained through seven years of writing about movies on, and off again is my admiration for martial art movies has not changed.

Merantau centers around a young idealistic man named Yuda (Iko Uwais) from the countryside trying to survive in a big city. The opening sequence further provides details on the importance of Yuda’s journey called Merantau; essentially a rite of passage where a young man leaves one’s place of origin, and find their place in the world. Trying to be like a coming of age story Merantau sounds like a guaranteed great story until you see the actual film. Very little is talked about on the philosophy of silat making the spiritual journey of Yuda get lost in translation. This is sloppily elaborated on through the character of Eric (Yayan Ruhian) implying his merantau changed him into a worse person. Eric hardly appears on screen, added with the absent of philosophy discussed in silat teachings all you have left is making ambiguous connection on Yuda not using silat to kill people.

Paired up with the simplistic storyline, and character arcs you’ll have the groundwork of a great story that never comes into fullizitation. Usually having three type of scenes for its heroes; the introduction, the conflict, and the eventual resolution they’ve worked for. Opting to incorporate as many fight sequences as possible you’ll get the bare minimum require for a story like this to work fine. The good guys are good guys, and the bad guys are bad guys. Streamlined to the point where even if you’re not paying attention you’ll know everything that’s going on. On the downside, the movie does try to generate some sympathy for it heroes. Little time is spend on fleshing them out beyond one scene so that part of the story’s writing falls flat.

One element I can be positive about is the film’s ending. Building on the opening scene the significance of merantau to Yuda’s homeland is also established early on. Spending a brief time touching on Yuda’s brother who failed merantau, and the social impact it had on him in the community. By getting across these simple things the ending actually provides something worth reflecting on. Being conflicting in a positive way since Yuda is doing his best to uphold his tradition while the environment endangers his life. Overcoming Yuda lack of depth as a character by inadvertently adding meaning to the journey makes a story that works fine end on a good note.

Iko Uwais in his first leading role has a natural screen presence about him. Before the movie gets to any fighting, Iko holds himself decently in the acting department. The role doesn’t require Iko Uwais to speak for long stretches cleverly hiding Iko lack of acting experience. Requiring for half of the movie for Iko to simply provide the appropriate facial expressions in a given scene before getting into fighting. Once Iko does get into the fighting he impresses with his athleticism, and graceful skill in performing his fight sequences. Another plus to Iko is him doing his own stunts, even if they aren’t that dangerous compare to other martial art movies.

Iko other co-stars despite having more experience than himself they do fine. Actors like Christine Hakim, and Donny Alamsyah only appear in the beginning of the movie, and than are gone until they appear again in the ending. There’s also Chika Jessica, and Yusuf Aulia simply acting as the poor child later gets written out of the movie for a large portion of it. Chika is simply in the movie to appear as sympathetic as possible. She only gets one scene to deliver a dramatically heavy scene, and after that just becomes a damsel in distress. There’s also Alex Abbad (who surprisingly plays the main villain in The Raid 2) essentially playing a punching bag. His line delivery in English is really slow, but when speaking in his native language he sounds natural, though doesn’t do anything to stand out in his portrayal.

With the actors getting shoved in the background brings us to the martial artists. One of them being Yayan Ruhian who yes has a fight with Iko Uwais in a elevator. Luckily the little dialogue Yayan has is delivered well, but doesn’t have much screen time in the movie. Then we get to the villains Mads Koudal, and Laurent Buson whom are the weakest actors in the movie. Despite Laurent being French, and Koudal being Danish both sound come off stilted everytime they talk. Thankfully both Koudal, and Buson perform in a 2 on 1 fight against Iko that makes putting up with their bad acting worth it to some degree.

Gareth H. Evans in first martial art movie showed a lot potential to help craft great action sequences. Something that’s apparent throughout the movie in spite of it budgetary shortcomings Evans tries to add some visual flairs. Some of these are simple like a tracking shot following Iko from a telephone booth; the camera goes over the telephone booth, and then proceeds to follow Iko into an alley. To more complex shots like multiple single takes during fight sequences almost all requiring Iko to fight against multiple people. A nice touch in the movie is Evan usage of music to help elevate sequences to make them more exciting. Knowing exactly when music should start, and stop playing in creating a mood. Something he would later on perfect in The Raid.

The fight sequences are nicely choreographed, well shot, and edited to flow nicely. With as minimum cuts as possible Evan fight scenes never feel overly edited. With this being Gareth Evans, and Iko Uwais first martial art film the fight sequences performance varies with some parts of a fight being performed more slowly than others. There’s also spots within the fight scenes where an actor has to stay, or go in place before the fight could progress. An example of this is when Iko throws a bottle at a fighter face, the fighter has his face cover for seconds, and stays like that before Iko gets close enough to pick him up, and toss him through a table. Instances like this are thankfully rare throughout. Offering plenty of good fight scenes also helps alleviate the problem.

Merantau is simplistic on the story front, but decides to make up for its shortcoming by including as many fight sequences as it possibly can. Once you get the first serious fight scene in the movie you’ll never have to wait too long for the next one to pop on. It’s missed the opportunity to make it’s story feel grander than it actually is, but any fan of martial arts movies will definitely leave entertained.