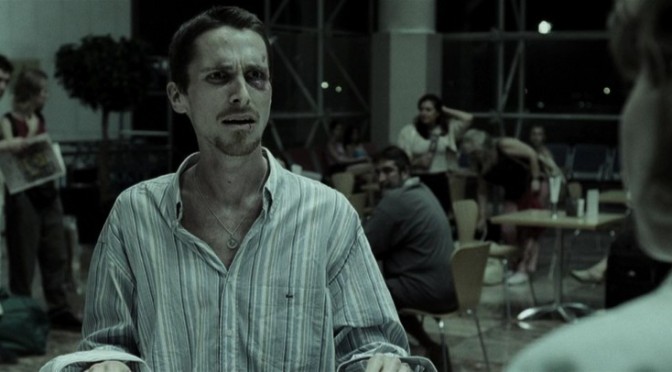 Insomnia is an all too common writing device that lends itself in creating a story where the lead character reality conflicts with the actuality of the world. Much like Aspergers, Insomnia is highly favored in its usage to add flair to a story that in a direct narrative wouldn’t have worked. “The Machinist” is such a case by removing a linear narrative and eliminating conventional characteristic is an psychological thriller that delivers one stimulating and thought provoking experience.

The Machinist is about an industrial worker who hasn’t slept in a year doubting his own sanity. Its protagonist, Trevor Reznik, starts off as a sympathetic blank page. Merely creating an image of man who from the setup is seen doing something bad, but upon viewing him live appears to be an innocent man suffering without a crime committed. Reinforcing a positive image on Reznik personality and questionable one about his lifestyle. Once Reznik is setup as a character the next step is to fill in the blank to how he got to where he ended up. Steadily through the course of the movie more about Reznik is revealed entirely through his dialogue. While visuals do play a factor in understanding Reznik psyche, it’s not on the same level as the spoken words. Revealing Reznik entire life story indirectly to the audience with Reznik interactions. Reznik is by definition and description is average, but his action in delicate situations suggest otherwise. Until the revelation near the end Reznik maps other suffering onto himself. Turning exterior conflicts into internal ones when Reznik is uncovering himself through the worst possible action. Aside from Reznik, another plot device is a hangman game on a post-it note. The word only has six letters and the last two letters are filled out. If this plot device was to be removed it would have taken away from the writing. It understands that the journey it more pivotal than it’s predictable destination. Because of it, the word can be guessed correctly or make a guess that comes close to it, but doesn’t detract from its story. Instead it adds a dimension that’s worth examining. Alongside his trouble psyche, poor physical conditions, and now his inability to defeat guilt are all traits that follow him. Weaving an intelligent, psychological thriller that is both hard to read in development and engaging in its complicated protagonist.

Director Brad Anderson creates an uneasy atmosphere at a steady pace. A bleak, nearly colorless look, sadness and dread combined to portray the world through Reznik eyes. The atmosphere is aided by Roque Banos’ moody score, but it is especially conveyed by the tasty cinematography, which is extremely desaturated–almost approaching black and white at times. It suggests an appropriate desolation. This is also reflected in the locations and set designs. Everything relating to Trevor current matter in his apartment, the machine shop, or in his car is in muted, blue-gray tones. As if fabricated by some unknown nature that has a score to settle with Reznik. Playing with his head that those around are after him. In contrast to the brightly lit scenes that highlight a real world quality to them. Not removing itself from tragedy, Reznik in brightly lit scenes feels naturalistic. Never does he feel anything in particular is dead set against him in the bad turn of events finding some truth to them.

Christian Bale is skeletal as Trevor and visually captivating in embodying all his flaws. Christian Bale more than visually matches his part, but acts it with the same level of dedication. His physical appearance becomes a part of the character not so much the sole characteristic of the character or Bale performance. Physically we see Bale for the broken and hollow man he is, but also adds a trait of humor when joking about his skinny body. Bale portrays he can fit into society, and shows various traits of an unstable mind with his obsession that turns into rage. Becoming another broken person and not just a walking skeleton. The rest of the cast is overshadowed by Christian Bale terrific performance. They do a solid job even if they don’t leave a big impression. John Sharian plays pretty much a “Devil” type character with his sinister smile and deep voice. To say there’s nothing subtle about his performance is understatement, but rather fits the role just fine. He’s energetic always hinting at something sinister with his line delivery. Jennifer Jason Leigh much like her other co-stars is given a single personality just like Aitana Sanchez Gijon. Aitana Sanchez is more cheering and Jason Leigh is broody. Their characters receive minimal amount of development, but can’t do anything beyond the exterior of the characters.

The Machinist is a steadily paced psychological thriller driven by one character and actor. Christian Bale becomes Trevor Reznik disappearing into the role matching it perfectly both physically and in his portrayal. Bale performance alone would warrant “The Machinist” is worth viewing, but add an intelligent story and with a physiologically broken lead you have a film that demands your attention.