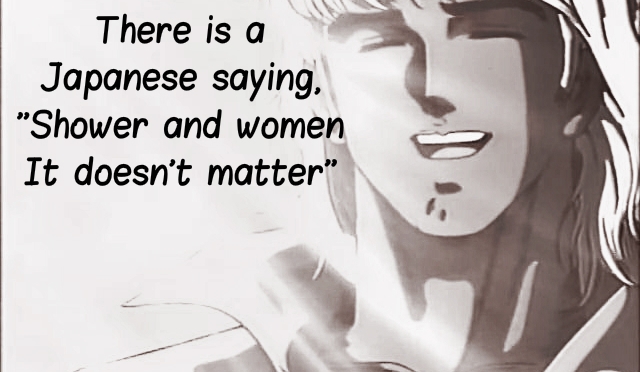 Sopantously doing this whole 12 Days of Anime thing made me realize that I’ve seen a lot more anime I liked this year than I thought I did. Heck, even the ones I disliked which includes the first season of Bingo Stray Dogs, Anime-Gataris, and Hosoda’s The Boy, and the Beast didn’t aggregate me as much as bad anime normally would. However, there’s always an exception every year, and this year it was the five (but felt longer) episode OVA Wounded Man by Magic Bus studio.

Wounded Man just won’t leave my mind. Maybe it’s the fact Kazuo Koike, who is responsible for creating Lone Wolf, and Cub which is one of my favorite manga. Is just as capable of creating something incredibly trashy. From the works of Koike I’ve read, he basically enjoys including plenty of violence, but justify it through in depth character writing, and thoughtful thematic exploration to provide the reader with something more substantial to latch on tool. Wounded Man doesn’t provide any of that. Also missing is the balls to the walls craziness of Mad Bull 34 also by Koike that made Mad Bull 34 trashy, but entertaining to watch all the way through. You won’t get any oversize police officer with grenades attached to his pubes, but you will get a doctor who says bullets always miss their targets right after removing bullets from his patient’s body.

What would have helped Wounded Man be a “classic” like Mad Bull 34 would be if it didn’t take itself so damn seriously. Giving hero Rio Baraka a tragic backstory with everything being all business, and no room for levity. Best of all, Rio Baraka single minded journey for vengeance is just that. He wants revenge without further layers added to it. The revelation in the last episode makes it perplexing why Rio Baraka a better arc. Expanding on Rio views on vengeance, or possibly providing some kind of moral like revenge is futile to make the destination worthwhile. Something that wouldn’t have made it all feel so pointless when it basically pulls the rug under Rio, and because of how static Rio the ending is just bad.

While I’m at it I might as well compare Wounded Man to another anime I saw this year I also disliked. That anime goes by the name Devil’s Line which I found was just as bad, and cringe inducing with its questionable writing. The difference between Devil’s Line, and Wounded Man quality is clear as day despite giving the same rating of a 1 out of 10. I dislike both of them immensely, but with Devil’s Line it is easier to see how it could have been good. The society in Devil’s Line had varying viewpoints on the existence of Devils, and brought up if coexistence is possible with them. Devil’s reliance feasting on blood, and looking alternatives to ease that addiction for Devils to live. Details like this I could picture leading to something good if they were handle better.

Wounded Man correlation to good writing is even harder to find. I found the romance in Devil’s Line to be awfully written, but I’ll take that over how Wounded Man handel’s romance. In Devil’s Line, there were scenes where Anzai, and Tsukasa just talked to build the relationship. Sure it feels contrive when both decide to hook up, but it lays out the groundwork to get there. Starting after Anzai saved Tsukasa from a Devil leading to her being infatuated with Anzai just like that.

Rio Baraka in Wounded Man first encounter with a woman is beating up her driver, raping her, and then saying it was for her own good to warn her about the danger of the amazon. This is also how Rio Baraka is introduced to the audience, and you’re expected to feel sympathy for this dickhead. His second lover he just romantically involved with in episode 3 after lover number 1 dies in episode 2. After that, he goes on to lady number 3, and rapes her to convince her to join him! Even if Rio didn’t rape the two women that fell in love with him he doesn’t have much of a personality, and the anime bother building his relationship with the women helping him on his journey.

I know in Devil’s Line Anzai got too friendly with Tsukasa at the end of episode one, but at least he didn’t rape her, and just try to justify it as a good thing. Anzai try to control himself there after to ensure he wouldn’t harm Tsukasa again. Okay, he tries to improve himself to be a better man. Rio Baraka, I know hammer in this point already, but he raped two of his lovers in the span of five episodes. So even something like Devil’s Line which gets rip to shred has better writing than Wounded Man.

For this it’s Wounded Man I’ll remember for a long time while I’ll slowly forget about Devils Line. The reason being Wounded Man is the antithesis of Death Note for me. Death Note broke my expectation of the possibility of good storytelling. It was a series where I couldn’t imagine how something with its premise could be good, and after watching it here I am watching more anime thanks to it. Wounded Man is not awful enough to make me want to drop anime, but it broke my expectation on how bad writing in anime can be. I never thought that would ever be possible, and while I don’t appreciate it right now. That new low bar for bad writing Wounded Man set was something I definitely needed. With a new bar set, I can wait to witness what’ll eventually break it, and possibly break my spirit while I’m at it.

So that’ll complete my day 2 of the 12 Days of Anime. I absolutely hate Wounded Man, but I’ll be lying if I pretended it wasn’t a strand out anime I saw this year. While further appreciating the good I saw this year I also feel I should take away something from the bad bunch I’ve seen this year. Thankfully the rest of these post will be more positive so I’ll see yah for tomorrow when I post something. Hopefully it’ll come to me just as naturally as this one did. See ya tomorrow folks!