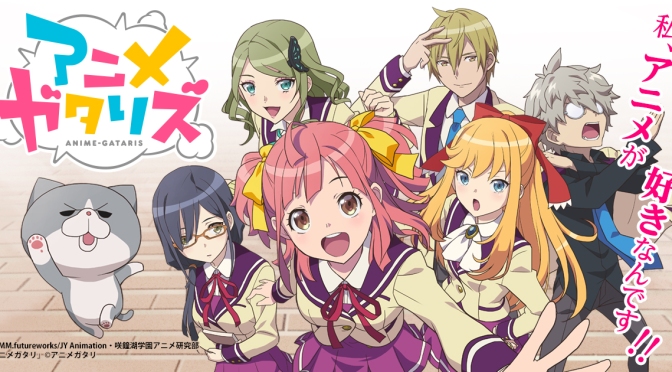 ….Oh man, this one I gotta say was annoying in the amount time the word anime was said. You might be wondering why I chose to watch an anime that literally translates too Anime-Chat in English out of the hundreds of anime I have on my plan to watch list. I asked myself the same question every night for the past six days, but then I remember someone on a Discord server I sometime visit. We’ll just call that individual Rob, who had a passionate hatred for Anime-Gataris. Hearing about it the anime from him for the first time, and his immense hatred for the anime was fascinating. I did a quick image search as a result of that discussion. It looked harmless, and nothing I would see from just a quick image search. However, he compared his passionate dislike for Anime-Gataris to my passionate hatred of My Hero Academia season 1 (man, do I hate that anime so much), and that kept it in the back of my mind. Of course, I gotta point out I this anime June 6, of 2018. Why still put in the date of when I completed something in these blog entries? In case I ever go crazy, I can blame it on one of these animes.

Someone strong negative opinion on Anime-Gataris got me interested in seeing it instead of passing up on it. During this time, I was around 5 episodes away from finishing up Little Witch Academia so why not replace something I had a blast watching with something I wasn’t enjoying. Great logic I know, but I gave it a shot, and to be fair, it still sucked. The whole idea of Anime-Gataris is average high school student Minoa Asagaya becoming entrance into the world of anime, and its fanbase. Okay, that is an idea I can go along with fine. The problem immediately start to pop up since if you know about anything about anime, and its community you will still have to go through explanation after explanations about various things pertaining to anime. Be it genres of anime, anime production itself, the appeal of certain animes, and what not. You get the problem, if you’re well verse into the anime community these explanations are boring to sit through. It doesn’t help either Anime-Gataris loves to use the word anime so much in its dialogue to the point I wanted the character to stop talking about anime! For newcomers, it simply paints every aspect of anime in a positive manner in broad strokes coming across more like an advert to join the anime community than something informative.

When the characters aren’t talking about anime, I kid. That’s generally all the series focuses on. It’s in the title, but at the same time probably seeing the characters have an interest in something else would be nice. Mino Asagaya starts out a normal high school student who doesn’t anything about anime, and once she reopen her school’s anime club with her rich otaku friend in episode 1 that’s all Minoa attention diverts too. Much like how it portrays the anime community, and fandom it doesn’t bother to even mention the possible addiction one can have to anime. Minoa begins to ignore her one friend on the track team who isn’t into anime as the series goes on, and there’s no repercussion. The setup is right there to bring up Minoa sudden obsession with consuming anime to be discussed, and gladly ignores it. This anime doesn’t like conflict.

In terms of a story it’s a slice of life with no overarching story until the last two episodes. Almost the entire series is just Minoa learning everything surrounding anime, and trying to not get her club shut down by the student councils. In terms of conflict, that’s about it. The whole over the top evil student councils act gets old quickly. There would be some more conflict between the anime club members, but after episode 2 where there is some bickering. Also, the line “You’ll make anime cry” caused me to pause the episode, and reflect on life choices. Not long enough since I still continued. There was one interesting plotline where Minoa talks to an anime director whose effort received harsh feedback, and how it soured him to anime. This conflict gets resolved unsatisfactory, but at least it displays some kind of negative aspect around anime.

When the “humor” isn’t all about making anime references it got some laughs out of me. There was one unexpected joke that made me laugh in episode 6. It was when Minoa, and her friends go to a shrine, and while holding up the good luck charms a bird poops on one of the charms Minoa is holding. It’s simple, but it got a laugh out of me since it came out of nowhere. Every other time it’s referencing some random anime. Simply referencing something does not equate to a joke, something this Anime-Gataris doesn’t grasp. The biggest drawback is having a mostly eccentric cast of characters so constantly seeing them do over the top things just becomes par for the course. Like one of the member believing one of her male member confess to another male member.

The last two episodes were the most entertaining since that’s when anime becomes one with the real world. Why it happens is convoluted, but at the same time this is a series that has a talking cat that on one pays attention too for most of the season. So anything is fair play in this series world. It actually starts taking shape in episode 9 when people ask for recommendation from the anime club, and the students replicate what they see from anime. You know, like building a working prototypes of working mecha legs, and building a Pyramid for a duel. This would be hilarious if the anime didn’t introduce a talking cat in the first episode. You know, kinda gives away something fishy is going to happen. Minoa talks to this cat who she refers to as Mr. Kitty, and Mr. Kitty is largely unimportant in the grand of schemes until the last two episode when he’s need to revert reality back to how it was.

I would talk about the characters, but you have the super eccentric fan in Kai Musashisakai, Arisu Kamiigusa the rich otaku, Nakano Mitsuteru the popular guy & the school’s prince charming, Erika Aoyama the closeted otaku, Miko Koenji who likes light novel, and Minoa Asagaya the outsider converted into an anime fan. Only half of these character receive any kind of development, and the ones that do don’t have much going for them either, Erika Aoyama is the most interesting since it’s implies she drifted from her former best friend due to how engage in anime. One let go of it while growing up thinking it’s for children, while Erika still enjoys anime, but doesn’t express it openly. Sadly, what could have been a intriguing subplot gets thrown to the way in favor of comedic antics. There’s Kai Musashisakai particular who loves doing over the top movements, roleplay as shounen characters, and believing he has magical powers. When he likes another club member you think the anime would do something with this, except for the fact…yep you guessed it. Nothing much happens with that.

The only character in this series I’m conflicted about is Minoa Asagaya. She isn’t any different from the rest either since I don’t care about her, especially when English dub actress Dawn M. Bennett tried to hard to make Minoa sounds cutesy. Minoa cutesy voice became grating to me, in particular when you know what word already is constantly brought up by her. Yet, I still can’t help liking her a bit for superficial reasons despite my annoyance. One of them being I like the silly facial reaction she gave sometimes. It’s one of the few things that actually made me laugh consistently. There’s also the many points she overthinks stuff, but I sorta liked that. Showed she cared a lot about her friends, and wanting to get closer to them through a common thing they liked. It’s the closest this series gets to fully developing a character. Some of her lines like “You’ll make anime cry” made me cringe, but at the same time Dawn M. Bennett delivery of these cringey lines made it memorable. I should hate this character because she’s one dimensional, but I just can’t despite my better judgement. As for her character design, I don’t know. Minoa looks exactly like her sister, but with pink hair. Actually, let’s stop talking about her now before I get into a internal philosophical debate on whether, or not I think she’s cute.

On the technical side from the English voice acting, animation, and music it’s subpar. The animation never gets a chance to shine since you just have characters talking about anime nearly all the time. The only chance it breaks away from the mundane are during the last four episodes where the animation gets a bit more silly. On the other hand, WAO World (the animation studio) are lazy in this department too. The most evident being episode 8 where the studio reuses the terrible looking 3D dancing animation in the ending credit within the episode in its entirety. That’s pretty lazy. Episode 8 also deliberately has some crummy animation, but it makes sense context as to why that is.

As I’ve re-read this I notice this, I notice this scattershot post seriously over the place! More so than usual. I should have expected that since as an idea I like what Anime-Gataris could have been, but I don’t like what it actually is. Flat character, annoying anime references, and just coming across as pandering to its viewer with how much it showers anime with praise after praise. On one hand, I did like seeing Minoa attempting to make friends within the anime community, and getting attached to anime like her friend. It’s just all happened to quickly feeling lackluster overall. The only thing I took away from this series is I got no clue if I like Minoa, or not.

Anime-Gataris had some good intentions to show the appeal of anime, and its community from the perspective of someone not well verse in the medium, but it’s a one sided affair. Much like any other communities, the anime community also has its fair share of drawbacks none of which Anime-Gataris ever brings up. That’s just a simple part of reality, but as an introduction to anime it doesn’t work either. Simply generalizing anime fans as people who live, sleep, and breath anime 24/7. I won’t doubt there’s people like this, but it doesn’t show different type of fans in the community. For anyone whose well verse in anime, and its community will find it many scenes explaining basic things boring to sit through. While newcomers to anime will simply be bored by the lack of any interesting development the story story takes. It’s lighthearted slice of anime that in the end of the day is harmless, but doesn’t know what makes a good series in its genre.