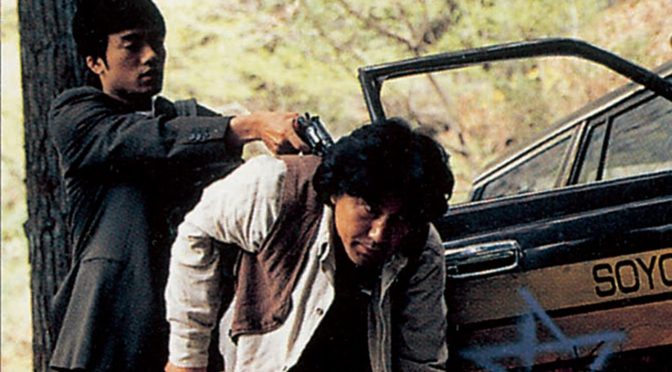 Today’s film is three things; an arthouse film, a leisurely pace film at nearly three hours long, and very mindful of the heavy theme it touches on. On paper, arthouse is typically something I ignore as some will typically sacrifice narrative worth for alluring visuals. Depending on the film the abstract accompany by pleasant visuals can add to something, and other times just feel like a complete waste of time. The lack of any middle ground in terms of quality, from my experience, prevents me from checking more arthouse films. However, Kamikaze Taxi is an exception in both areas; it’s exactly what I expected out of a arthouse film, but exceeded everything I thought it could possibly be. I am willing to go as far as to say this film might just be an underappreciated classic.

KamiKaze Taxi follows a revenge-seeking man, and his foolish friends plan to rob a yakuza gang. Despite that simple synopsis, the film covers much broader subjects beside vengeance. It touches on violence in many perspective from the conceived honorable sacrifice of a Kamikaze to the senseless nature of war. You might even be surprise for a film that has plenty to say about violence there’s hardly any of it to be found within the actual film. Instead, you’re treated to a cast of fleshed out characters with some level of depths to them. Tackling heavier subject matters, especially for the Japanese audience, on a nuance level.

The film begins in a pseudo-documentary style, commenting on the presence of Japanese with foreign upbringing, and how they are not looked upon as “true Japanese”. Further illustrating this is the first sequence where young Yakuza Tatsuo Minami (Kazuya Takahashi) is introduced to Senator Domon whom comments he hopes Tatsuo is a full blooded Japanese from his Korean sounding name. It’s not just a one off comment that makes up Senator Domon character, but several scenes throughout the film where he freely share his racist remarks, even on live television. Later receiving characterization on his likes for Jazz music, and perceiving himself as a true Kamikaze with his boastful nationalistic pride. All the major characters in the film receive this level of characterization.

Slow moving as it might be in its pacing it uses that to have secondary character to provide humanizing moments amidst the aftermath of a violent sequence. One such example of this occurred early on in the movie; Tatsuo job is to set up Senator Domon with women to sleep with, and after a bad night (which occurs offscreen) he has a lengthy conversation with the women involved. Being unable to view them the same way his Yakuza brothers do, and it’s many moments like these that elevate Kamikaze Taxi into something special. What short bursts of violence it contains become layer with meaning for the participants, and for the viewer weaves an engaging narrative sharing a intimate understanding on it complex issues. 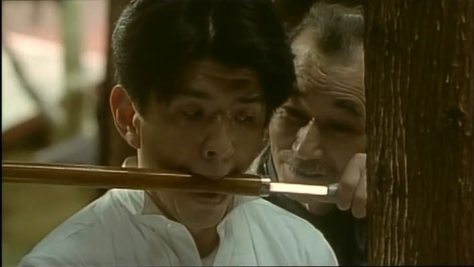 “Bite on this while I kill you gently”

Kamikaze Taxi starts with Tatsuo Minami story of desiring vengeance is just the beginning of the movie before transitioning into the meditative phase of a road movie an hour in. It is right here where an already good movie with a great foundation becomes even better. On the other corner we have the other major character of Kantake (Koji Yakusho). The unlikely bond, and connection Tatsuo, and Kantake form elevates the preceding events of simple ideas, but broad introductions, and give them depth here. Themes such as what is truly consider Japanese, the long term effects of violence on a person, what defines a Kamikaze or Yakuza, moving from past prejudice, and other subjects fully develop.

One of Kamikaze Taxi noteworthy scene requires the characters to reflect on their life choices through a seminar of sort. Encompassing the comedic, and the dark nature of its characters into a single sequence. Scenes like these are a dime of dozen in Kamikaze Taxi allowing even minor characters to influence the larger narrative in the end.

Not bound to just tackling contemporary issues specifically pertaining to Japanese culture it also delves into more universal themes. The already mention viewpoints of violence, pride, love, freedom, and ultimately forgiveness. Much like its characters, the story leisurely makes several stop during its journey. Either to build the bond between its lead through something simple like navigating a map of Japan, or taking a breather from the harrowing situation with a drink. Characters aren’t afraid to discuss the harsher aspects of life the closer they get to their journey’s destination, even contemplating simply escaping from their dangerous endeavors. Through their many exchanges, understanding these characters along with developing the fictional backdrop tackling real issues become easier to grasp.

What better way to end a fun party than telling everyone about my tragic past.

The journey this film will take you on isn’t all smooth. For an ambitious film with a desire to tackle a number of themes it is riddle with some issues. One of these being the complete disappearance of the pseudo-documentary framing device from the narrative. It’s disappearance isn’t harmful to the movie since it setups all the working pieces that later pay off once they get fleshed out. What is potentially harmful to the viewing experience is the circling around of established information. Kantake in the movie expresses his issues finding work in a country because of his ethnicity, but the documentary portion of the movie already set that up in its opening minutes. In context, Kantake explaining his situation makes sense, but within the narrative it’s just reiterating information with nothing adding on to it. They also eventually disappear from the movie making it have narrative inconsistency in its execution.

Perhaps the biggest hurdle for viewer in this movie is the way it ponders. There’s a lengthy sequence at some hotel where the characters are enjoying downtime from their journey. What occurs is a series of goofy antics before getting into the characters reflecting on their choices that led them to this moments. These halts in the movie can take several minutes before offering anything that could progress the story. Naturally being all over the place when it shifts gear into being a meditative road movie. These issues might detract from the experience for some viewers, and to a greater extent hurt the viewing experience since the film delve into many subjects.

By the end of the film, it’s obvious by how much I gushed about the writing I simply was in awe from such a thought provoking piece of cinema. Rarely does a film for me ever reaches the narrative heights Kamikaze Taxi accomplishes in virtually all aspects. I was never bored watching Kamikaze Taxi thanks to its engaging characters whom I grew to like a lot on their journey. Spending so much time leisurely developing, and fleshing out everything it tackle created an rich experience not offered to me in many films. Its shortcomings aren’t things I’ll excuse, but they are weaknesses I can forgive for everything I feel it excels in creating.

In its natural habitat, the third wheel.

Director Masato Harada helms the film with ease. Visually arresting with it neon nights city, flute center score, and a dreamlike mood that make it an absorbing viewing. The Peruvian flute like music in particular grew on me over time giving the film a unique soundtrack that I can’t recall other Yakuza movie ever having. With the exception of a few scenes requiring over acting, Masato Harada is able to keep the film realism in tact. Providing the film a grounded touch that it needed, especially during the more solemn scenes when characters are opening up about themselves. Rarely ever using music to influence the audience what they should think during an important character building scene. He also isn’t afraid to inject a bit of humor to prevent the film from becoming overly moody. One sequence where his direction is a bit of a misfired is when Koji Yakusho, and Taketoshi Naito (Senator Domon) only scene together involves an over the top outside inference in their encounter. It’s pretty odd witnessing something over the top happen in the movie when everything else is somewhat grounded.

Standout actor here is obviously Koji Yakusho as Kantake who provides the film most grounded performance. Carefully able to hide the inner turmoil of his character without making him come across as emotionless towards those around him. Without question, his shining moment of acting is when during an long take he reveals his tragic past to the other actors. It’s a scene that is perfectly solemn, and delivered with the right amount of emotion. Overshadowing his co-star Kazuya Takahashi who plays Tatsuo. Takashi isn’t bad in his role either; displaying his character insecurity to fully be a Yakuza with such a sensitive side to him. As the film progresses, Kazuya portrayal of Tatsuo slowly matures into a deep thinking young man by the end. Embodying the puzzling mindset of Tatsuo perfectly. When together, Koji Yakusho, and Kazuya Takahashi are simply wonderful together.

Those wounds are nothing compare to what I went through in Battle Royale.

Taketoshi Naito who plays the racist, and at times misogynistic Senator Domon does a great job in his performance. By choosing to not over act his character feels more humanize, and detestable for it. Benefiting the film by giving it a more realistic depiction of this film’s version of a villain without actually being one. Mickey Curtis who makes sporadic appearances in the film is a treat to watch. His laid back attitude as a Yakuza underling rightfully gets across his character experience. When needed too, he definitely display his tougher side. Finally, Reiko Kataoka who just like Koji Yakusho later becomes a mainstain in the story. She also deliver a great performance on the level of Koji Yakusho, and Kazuya Takahashi. These onscreen chemistry is simply perfect able to make you believe they have created a great bond together despite the small amount of time they spent together.

Kamikaze Taxi is my kind of art film; slow moving, but visually alluring, loosely meditative narrative, and handling of several subject matter gracefully. It’s a film that was a more than pleasant discovery during my viewing, and giving me far more than I could have ever expected from it. I expected, from the trailer, a lengthy Yakuza epic with violence throughout, but instead what I got is a far more ambition, humanizing film that not provides frank criticism on Japan’s culture, but also a film that never bored me, and serves as a personal reminder the profound power arthouse cinema can have.