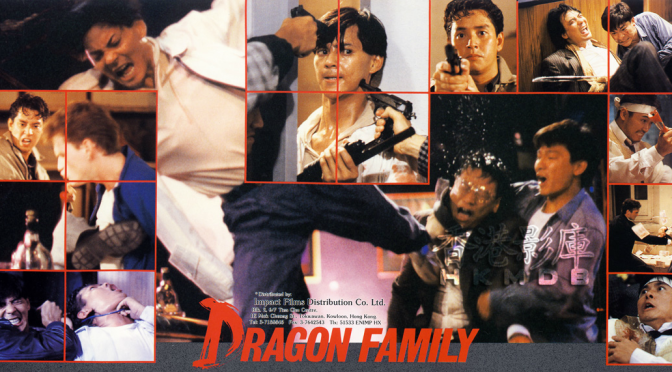 In 1986, in China that is, a little film known as A Better Tomorrow by John Woo was released. The influence the film had in its region film industry is an understatement, and often credited as setting the template for the heroic bloodshed genre. Due to its unpredescant success due to having virtually no advertisement at the time marking its influence on several films, and filmmakers at the same time to capture the same gold. Thus, today’s film in question is one of those films that is heavily influenced by A Better Tomorrow. Like many other films at the time, many try to capture the magic of the film that inspired them, but couldn’t duplicate the critical, or financial success. However, in spite of its heavy influence The Dragon Family (1988), unlike other films of a similar nature, is able to stand as a good film outside of A Better Tomorrow’s shadow.

So, this is how the movie got funded.

The Dragon Family follows the leader of a group of 4 triad families on their decision go straight and stop dealing in drugs, 3 of the 4 follow suit, but the 4th decides to continue with their illegal dealings, and frame the son of the boss to climb up the ranks. During my viewing of the film it became very evident that this film’s premise wasn’t going to live up to its full potential as I would have hoped it would. The groundwork is laid here for a gripping, and compelling crime epic with a few action scenes thrown in for a good measure of thrills. However, due to its run time of 90 minutes everything from characters, story, and themes come off as cookie cutter. For example, you get the usual blood brothers (A Better Tomorrow), followed by a betrayal by someone high ranking in the triad (Flaming Brothers), death of a loved one orchestrated by traitor triad (Tragic Hero), and an explosive finale involving the traitor (A Better Tomorrow again). This outline is simple to follow, and its formula is predictable for those familiar with these kind of Hong Kong action films post the release of A Better Tomorrow.

Same thing applies for the characters as you have the wise old veteran whom everyone looks up to as a father, the young hot headed trouble maker who can’t go straight, the youngest member who has bright future ahead of him coming back into the criminal fold, the loving collected mother, and so forth. Sadly, almost all of the characters don’t have much to them beyond these descriptions. Only a few characters whom survived past the sixty minute mark receive any added characterization, but even then it leaves much to be desired.

Fortunately, everything else that is streamlined is in favor of the film, and the viewing experience. Much like the vein of a similar movie I recently reviewed, City War (Yi dan hong chun), it starts out like crime drama at first for around fifty minutes of its runtime. However, the difference is plain as day; the pacing is brisk, and scenes are to the point not prolonging any obvious plot points. Spending the first half entirely setting up events, and characters before its goes in the realm of a action revenge flick. Cookie cutter characters are sympathetic in their cause as well as not reaching higher than it knows it can actually achieve in its length. Something that’s quite baffling since Eddie Chan Shu-Chi, and Yuen are credited for the screenplay, and the story are credited to Lau Kar-wing, Clarence Yip, and Wong Jing making the total of five writers who worked on this. In its modesty, you’ll also find a film that actually tries to add some depth to the topic of vengeance. It doesn’t end up going anywhere meaningful, but the characters history in the field of crime, and some of them attempting to achieve a better life gives it some worth.

The cast listing for the film is ridiculously long, and they include Alan Tam, Andy Lau, Max Mok Siu Chung, Ken Tong Chun Yip, Norman Chu Siu Keung, Michael Miu Kiu Wai, William Ho Ka Kui, Lisa Chiao Chiao, Stanley Fung, Kent Cheng, Ku Feng, Lau Kar Wing, Shing Fui On, Philip Ko Fei, Wayne Archer, Charlie Cho Cha Lei, Kara Hui Ying Hung, Blacky Ko Sau Leung, Nick Masters, O Chun Hung, Pak Man Biu, and Sin Ho Ying. Yeah, that’s quite the cast, and especially attention grabbing for anyone who explores Hong Kong action cinema. In spite of the large cast it’s surprisingly easy to summarize the quality of acting within the film. The older the actor is the better the performances turn out. Granted someone like Shing Fui-On whose villain like appearance lend itself to Fui-On smooth portray a criminal wouldn’t find it difficult to disappear into his small role. Same with O Chun-Hung who portrays a father like figure to the younger generation could easily sell viewer on his portrayal thanks to his appearance as well. However, with the two examples given you wouldn’t be far off in thinking the older cast members make good out of general onenote roles.

Younger actors like Andy Lau, Max Mok/Mok Siu-Chung, and Alan Tam completely take the lead once the film gets over the halfway mark. Before then, these three actors are still in the film, but the film attempts to give equal screen time for other actors to get in their stuff in a good move that, especially if you go in blind, will make you wonder the outcome of characters throughout the film once the action hits. Out of Andy Lau, Max Mok, and Alan Tam the best performance is easily given by Alan Tam. Unlike a majority of his co-stars, he’s given more range to portray a more dynamic character who can at least allow him to come off as responsible, caring, and eventually brave. Andy Lau, and Max Mok portrayals follow largely the same trajectory. However, all three actors can equally share praise in performing their action scenes, along with some of their other cast members. Lau especially whom puts his body through quite the endeavor for the audience amusement. What saves this film from others A Better Tomorrow wannabe is Lau Kar-wing fine direction as never once throughout the film is he, or any of his crew ever confused on what type of film they are making, and when in the story they are making such a film.

The action choreography is handled by Chia-Liang Liu who won an Golden Horse (Taiwan/China equivalent to the Academy Awards) for Jackie Chan’s The Legend of Drunken Master (1994) renowned for its famous final fight sequence. It’s a factoid that will go largely ignored for the average movie viewer, but won’t be ignored is Chia-Liang Lui craftsmanship of action sequences. Lui first action sequence, which doesn’t appear until the second act, ensures to reward the audience, in particular action junkies, patience with a good shoot out. In this sequence, in a small room dozen of people are simply massacre heighten by tension thanks careful craftsmanship of seeing attempt after attempt of people trying to escape, or survive fail one after another. This first set piece does an excellent job displaying how harsh the criminal world can be.

The second action sequence, in vein of the first one, is also centered around survival/escaping from setting where the sequence takes place. Taking place at night, the choreography, and cinematography keeps the action at a distance, but also capturing the helplessness of the situation as the characters you follow struggle to stay alive. Showing in true desperation using household objects around them to fight off goons. Unlike the first action sequence, this one is more reliant on fight choreography, though is one sided for this sequence.

Without a doubt, the standout sequence in this entire movie is easily the finale of the film. Combining gunplay, and several uniquely choreographed fight scenes together all in one sequence. Unlike the previous two sequence, the climatic action sequence is a all, or nothing setup. The gunfight it starts off with isn’t just cover, and shoot, but constantly moving around. Despite the constant movement of the gunfight the cinematography never loses sight of the action, and editing makes it all flow seamlessly. It’s quite an exciting sight seeing a gunfight that while quick has a lot going on in it besides ducking, and shooting. Once the guns are finally scrapped the fight sequences take over, and this time fights are even. Requiring the actors to take some serious painful falls, and throws through some rough objects to demonstrate the rough confrontation. Succeeding in truly ending the film on a high note.

The Dragon Family is the kind of film that makes you wish it was more fleshed out in its writing on all fronts, but in the end turns out to be a fine way to spend 90 minutes on. The few action sequences it offers are the true standout of the film while everything else does enough to not drag down the experience. Those familiar with Hong Kong action cinema post A Better Tomorrow will find familiarity in the material it threads on, but also find an enjoyable action flick. It won’t ever surpass the film that inspired it, but unlike many other imitators, The Dragon Family won’t remain the shadow of its inspiration.

I didn’t know where to place this random factoid, but if you look up posters for The Dragon Family (1988) you’ll notice Andy Lau headlines the movie. No surprise since even now Andy Lau is still a big name. However, what you likely didn’t know is that within the year 1988 Andy Lau headline 10 movies! The reason I didn’t put this random fact into the review itself is because I felt it ruined the flow of the review, and distracted from it.

One thought on “Cinema-Maniac: The Dragon Family (1988) Chinese Movie Review”