When determining what films to see, and review I welcome taking a “risk” once in awhile. By “risk” I mean going blind into a film that is not discuss in professional reviewing outlets, or among bloggers. What makes these “risks” satisfying is discovering a great film, and giving it exposure no matter the size of your contribution, or readership. Every review on an obscure title praising a good unknown anything will give it a better opportunity to grow. This is one aspect of the internet I embrace than no matter how I end up feeling about a finish product I get expose to all sorts of media I probably wouldn’t have checked out my limited knowledge. Of course there are films like Homicycle that make me question if the word standards is like a myth to certain filmmakers. Sometime there are bad films I encourage seeing either for building standards, or to find entertainment in a way that wasn’t intended. However, Homicycle is filled with so much deadweight I advise you not to see it to save your time on something better. As of this very moment, this is the worst film I’ve seen that has cycle in its titled. Yes, it’s even worse than the time I saw I Bought A Vampire Motorcycle.

Homicycle is about the titled character who dispenses vigilante justice against a criminal organization. It sounds cool, but that didn’t translate into a product that resembles entertainment, or even competency by bad filmmaking standards. For starter, the film quality of writing along the line of one of those kind of films that just has a single thin idea stretched out. In Homicycle, if we removed the filler material of the film than the actual meat of the film is 50 minutes long. With the filler, it’s only 70 minutes, yet feels allot longer than it actually is. The film has little essence of substance even on a surface level as neither story, or characters are expanded on beyond the basics. Scenes just go into random scenes disconnected from any semblance of progress. I can’t believe I’m saying this, but the film self aware tone is what kills the film. It knows the setup is right up a traditional 80s B movie throwing in a simple story, odd characters, and some occasionally awful dialogue. However, intentionally making a bad film does not translate into an unintentional comedy. Since it knows what kind of trashy film it is making it impossible to enjoy to enjoy from a so bad it’s good perspective.

As for the actual story itself it’s one of vengeance. The film never confirms the of identity of Homicycle, but the single clue the film gives to the audience leaves little to the imagination who it can be. A character connected to the vigilante spells it out to the viewers by saying his name. Removing any possible mysterious aura from him. Another aspect about Homicycle is the lack of confirmation of what exactly he is. In one scene, he punches through a guy guts in order to kill him, but within the same scene get beaten by a normal man. Then there’s the fact the film suggests a character in the story, Eddie (Mac Dale), came back from the dead to seek vengeance. Having already explained the film doesn’t go beyond the basics. What kind of force made him come back to life isn’t surrounded by concrete material. If it was something supernatural it wouldn’t fit since nothing otherworldly is mentioned in the film. However, it doesn’t work the in the “realistic” vein either since it means Eddie survives a shot to the head at point blank, his wife buried him in her backyard, and been buried for who knows how long in better condition than he was alive. A film can’t just assume it audience will accept anything at face value if they did nothing to earn that trust.

What follows Homicycle around is a string of bad jokes escalating to sheer boredom. It place randomly with toilet humor, or innuendos jokes. When jokes are used to pad out the running it’s quite sad. Characters relationship don’t go beyond the basics. You’ll have to assume what archetype characters fall into. For instance, the villain of the film Brock (Peter Whittaker) is the best developed character in the film. He dresses up as a pirate, has odd fetishes, and is a criminal lord. That’s it. Nothing about why he acts the way he does, dresses the way he does, or what his goals are is shown. Picture the rest of the film characters being less developed than Brock. Filling the screen with characters that just mesh with one another in a forgettable manner. Having no personality of any kind.

The filler material consist of a sleazy producer talking about how scary the film apparently is. This is your introduction into the film. So, this sleazy film producer claims the film is so scary there’s sexy nurses are in the lobby ready to dispatch to help if the film causes you health problems. If I was watching this introduction in a film theater it makes since, but at home it simply tells me the filmmakers were to lazy to write the exact same scene simply changing two words to make it work when viewing it at home. Also, if you happened to die during the viewing of the film your family will immediately inherit 1 million dollars according to the sleazy producer. If that wasn’t pointless than the film inclusion of a bikini contest certainly will be. Sometimes when filmmakers know they’re losing their audience they’ll throw in some sex appeal to keep viewers awake. This bikini contest adds nothing of value to the film. The contestants names are Candy, Mandy, Brandy, and Sandy. Why all the contestants have Andy in their names I can’t tell you. Probably it was meant to be a joke, but that would be giving the film too much credit if I acknowledge it had any idea of what comedy is.

The biggest waste of time in the film, besides the whole thing, is an intermission with ads for concession food. Homicycle, if we’re being generous, is 70 minutes long so an intermission is not needed. Besides being insulting that the filmmakers believe viewers can’t sit through a 70 minute long movie. This intermission is also pointless. Another pointless addition in the film is a concert that you might have guessed by now adds nothing of value to the film. These filler moments of the film break pacing as it brings things to a sudden stop. Another point of filler are repeating two scenes. A flashback showing Eddie death is shown twice in the film. Though, the biggest middle finger is the film opening sequence when is the same scene used to end the film. No variation as it plays the same opening sequence in its entirety for its ending. So when taking it all in, the film went in circles, and accomplished nothing pass the starting point. 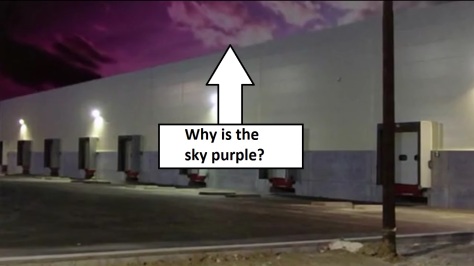 From a filmmaking point of view there’s also no passion shown in its production. The most amount of effort put into the film was copying the grainy image of a 80s B movie, and duplicating shots from that era. However, the visuals don’t improve the story, nor is able to hide the horrendous acting. Director Brett Kelly couldn’t be bother fixing easy mistakes. One of them was showing an actor firing a nail gun, and no nail being visually shown coming out of the nail gun. He lingers on special effect shots too long you can see the hose where fake blood is coming out when a person’s head is decapitated. Another trait of Brett Kelly is his sheer ability to add random things in post production. For instance, there’s a shot that last for a few seconds, and in the background the sky is purple. No reason why, it’s just there just because Brett Kelly can.

The one scene in the film that showcases Brett Kelly lack of understanding as a director is the film shootout in a warehouse. Brett Kelly made his fake gun muzzle effect, and fake splatter very noticeable in this sequence. The slow motion in the scene makes the poor special effect very noticeable. Apparently in the same scene, Kelly felt it was necessary to place render images of blood splatter in the background, yet whenever there’s a cut the blood splatter that was in the background is longer there. So Brett Kelly went out of his way to ensure there these special effects are in the film, but didn’t care enough to maintain continuity which defeats the purpose of adding special effects in the scene. He also forgets to place fake muzzle effects when a background actor is shown shooting at Homicycle. Another inconsistency are the CG bullets that come out of Homicycle automatic guns. Then for some reason Brett Kelly doesn’t bother placing CG bullets coming out the guns even though the rest of sequence he had them there before. Within the same sequence, Brett Kelly forget to show certain goons getting killed on screen, and absolutely forgets bullet holes despite the fact he chose to add fake blood splatter in post production. Also, the goon despite not being obstructed by anything all missed shooting Homicycle. This is the worst shootout I’ve seen in a homage film.

The acting much like everything else is awful. Only actor Peter Whittaker is noteworthy because of his over the top performance, and fake eyebrows. He puts effort into his performance attempting to make badly written scene funny. However, he’s unable to make jokes work because his co stars don’t bother putting effort into their performance. Peter Whittaker isn’t talented enough to make a joke work on his own. Brett Kelly not caring about producing anything of value spread to his actors which is why they phone it in. Special effects are cheap looking when they’re lingered on too much, and every single practical effect is badly executed. Music is forgettable, and the cinematography while good visually duplicating 80s B movie imagery is enough to hide the many issues of the film. If anything, I want to spotlight Trevor Payer, Jennifer Mulligan, and David A. Lloyd who are all given writing credits. Between three minds they couldn’t come with enough material to create a feature length film. That’s embarrassing.

Homicycle is the worst kind of film that doesn’t offer anything worth of value. When negatively dissecting the film, the self aware tone tells you the filmmakers made an intentionally bad movie so there’s not much to learn from it. There’s not much to dissect either as it’s dead air through it 70 minutes run, and 20 of those minutes are filler material that could have been out. In the end, you’re left with a film that is worthless. If the filmmakers didn’t put any effort to create a film of any value viewers shouldn’t put any effort themselves in seeing this garbage either.