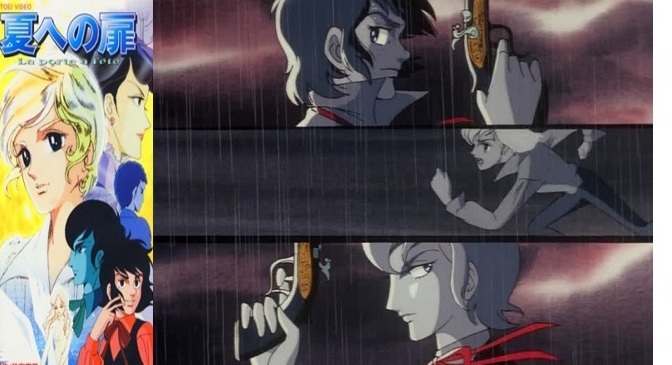 Natsu e no Tobira/The Door Into Summer in English is an animated film from 1981 based on the manga of the same name by Keiko Takemiya. A pioneer of shonen-ni/yaoi manga in the early 1970s whose short story, Sunroom ni te, contains the earliest known male-male kiss in a shojo manga. She’s an accomplished mangaka whose contribution to her field is far more interesting, and engaging than this Madhouse and Toei produced animated hour-long film. It’s a relic of the past that is better left collecting dust.

Natsu e no Tobira attempts to be a coming of age story tackling the idea of raw love in youth. Unfortunately there isn’t enough material for it to delve into its own chosen subject. Right off the bat the film opens with intrigued starting ​at a future point with two friends in a twenty paces pistol duel with main character Marion in his attempt to stop them. This opening is stylishly presented with field of red roses contrasting against a dark sky along with black and white human characters figure in the pouring rain. This opening scene is a good hook in making the viewer wonder what led up to this moment. Everything after this opening is an immediate failure.

For starter,​ the biggest issue for this coming of age film is there’s virtually no characterization. Without establishing how the central characters were before experiencing their life changing events it doesn’t feel like they learned anything from their conflicts. A character in the film reveals he has feeling for his male best friend which isn’t hinted at any point in the film. It’s a spontaneous revelation that only brings to mind crucial questions. What made him fall in love with his friend, and how long has he felt this way aren’t answered. Presenting itself more in the way of an over the top soap opera exaggerating every major scene. Similar dramatic scenes are presented in ridiculous way, but are not enjoyable because they’re meant to be taken seriously.

Another issue is Marion is a boring main character. He, like the rest of the film, is simply going through the motions of events without setting up a proper groundwork. Marion point of view on love is of that of a fairy tale, but he’s too shallow to be sucked into the emotions he’s going through. There are only few lines of dialogue that attempt to characterize Marion, and give a bit of backstory, but they’re delivered in a  throwaway manner not allowing time for those plot points to sink in before another event happens that progresses the story. The dialogue in general revolves around love which gets repetitive when characters have no other things to talk about.

There’s a scene where our characters see the dead body of a friend that committed suicide. One of them acts appropriately being sadden at the lost of a friend only then to utter out loud he wants to be hold by the woman (who’s in her 40s) he loves. In the background of the same scene two other characters talk about dueling to get a girl hand in marriage. A friend of these characters killed himself, learn about it recently going to the site, and they are so self-absorbed in their own problems to pay to their dead friend any proper respect. Other characters don’t fare any better. Marion is one-dimensional while everyone else are more in the cookie cutter variety. Nearly all the characters have a conflict revolving around love, aren’t developed to make any said change meaningful, and are treated as plot devices.

Madhouse and Toei Animation who are responsible for putting this anime movie together were faithful to the manga which is a negative. The manga is a single volume, less than 80 pages manga telling the same exact story which would take an average reader less amount of time to read in its entirety than watching this film. There’s not enough material to extent into an hour-long film. Unfortunately the added scenes don’t improve an already short story with rush pacing and shallow writing. It’s bloated with scenes dragging out in order to be extended to an hour length. Instead of expanding on the basic story it inflates itself with material that doesn’t do much in the long run to improve the source material. One of these decision is giving supporting characters more screen time, but that doesn’t amount too much since supporting characters are simply tools to advance to the next scene.

All the characters look feminine, especially the males. Emphasizing beauty of character over anything else. Containing sparkling eyes, smooth skins, and gorgeous similar looking hair cut. None of the character designs standout being exactly what you would expect from a Shojo that doesn’t attempt to standout. The background is generally blurry in line with a wispy like style. With the exception of the flower field where the duel is held backgrounds are dull to look at with minimal detail paid to them.

The music is composed by Kentaroh Handeda whose score is a mixture of violins, saxophone, piano, and low-key singing of lalala lyrics. If you allowed a giant pile of cheese to produce music for this anime you would get the same result. Not a single memorable track helps the anime in any positive way. There’s a terrible sex scene in the film which is made worse by jazz like music combine with animation that attempt to make it look poetic. The result is one of the worst sex scenes you could see that’s animated. In general the music is forgettable and has the power to put anyone to sleep when listening to it.

Voice acting from the entire cast is weak. Granted the material wasn’t good in the first place, but the voice work doesn’t fare out better with the vocal performances. The gender roles are basically reverse in their performances; the females are reserve, and the males are more emotional. Like with everything else in the film the voice acting leaves allot to be desired. In general being trite, unconvincing in relaying across any proper emotion in their line delivery to make them believable.

Natsu e no Tobira has a lot of problems, but the one thing the anime movie does better over the manga is the pacing so everything in the film flows more naturally. While there isn’t enough substance to justify its own length at least it unfolds in a more proper manner than the manga. However, even with that small praise it clearly went to waste. Madhouse and Toei studio both failed to add anything to something that was already rushed, and shallow from the source material managing to make it worse in animated form.