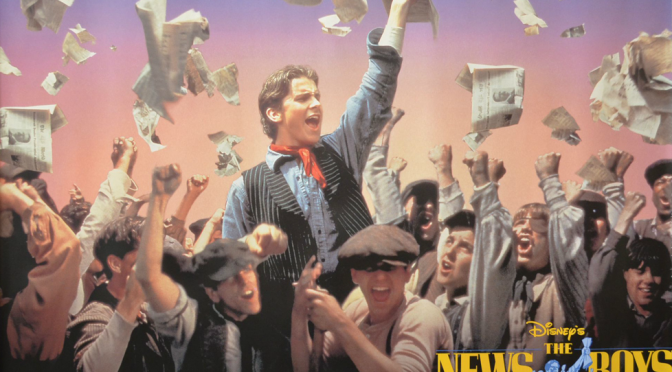 On the surface “Newsies” has my attention being based around true events that are usually ignored and starring a young Christian Bale. While the material doesn’t sound riveting Bale is more than capable in providing a compelling performance to carry the film. However, upon discovery it was a Disney live action musical it turned into a worst case scenario that instead of subverting expectation it plays into them. Creating one noisy mess of a film that could have worked for both it actors and the story if it knew to be a drama or musical instead of sloppily meshing the two together.

Newsies is a musical based a true story about the New York City newsboy strike of 1899. Immediately the film begins to crack opening with a poorly written and constructed song about working (oh come on, that lazy Disney formula). Now I’ll accept back in 1899 New York City “Newsies” sang on a daily basis on just about anything, ten years old were allowed to hang out in pubs and drink the night away, and I’ll even buy Joseph Pulitzer plan to make more money will obviously not work if it all leads to something compelling. It never amounts to much because of the Disneyfication of a film that clearly was meant to be a drama is tailored into an indispensable, uninspired mess. Missing is coherency in its narrative structure to support dialogue dramatics and the musical numbers. Pacing is erratic sometime going for long stretches without a musical number to having too many songs pile up on each other. The quiet moments of the film are filled with indispensable cliches. From the cast of heroes there’s a newsboy on crutches, the little kid, the rebellious hero going against the establishment, and of course the hero’s best pal that warms up to him, who has a pretty sister. Not to forget the one dimensional villains whose only defining traits are to make money or pick on children. There’s nothing wrong with simple morality, but when the characters themselves acknowledge how stupid they act it begs to question what is actually consider morally good by this film standard. Our protagonist, Jack Kelly, lies for a living to make money to not starve to death. A trait that is meant to earn the audience sympathy, but Joseph Pulitzer who makes a honest living selling newspaper and gave kids jobs barely scraping by with their wages in the first place is perceived to be bad. Since Pulitzer is the standard villain who hates people and motivated by money his action have a predictable outcome to the conflict. On both sides you have characters whose action are supported with a weak body of characterization to take them seriously.

In middle of the erratic pacing and cliches it calls characters are the plotlines simultaneously having too much with little breathing room and stretched out beyond repair. Token supporting characters drop in and out at a moment notice. For example, Jack Kelly visit his best sister house falling in love with his best pal sister. All that was needed for Jack Kelly heart to be taken away with his significant other wasn’t the growth of their relationship, learning about each other, but occasionally gazing at each other in one scene and they know it’s meant to be. It doesn’t matter that Jack Kelly shares more scenes with a older man another supporting character than he does with his own love interest. Jack Kelly also has his own arc to overcome which is too kinda organize the Newsies to strike. A job later handle to another character temporarily which goes to display the lack of importance of their position. None of the characters feel important to in fighting for their cause. Every one of them feels disposable and interchangeable with one another. Weak characters, scatter plot lines, erratic, and some badly written musical numbers can create a noisy snooze fest of a film. Top it all off, the motivation to start the strike is thrown away at the climax as if to say I give up.

If judged as a Disney musical it’s PREDICTABLE! Anyone not familiar with the “Disney” formula here’s how Disney lazy efforts usually play out; It opens with a choral arrangement preferably a work song (Carrying the Banner), characters grow up in a montage over the span of a single song, dead or absent parents that occurs quickly or off screen and probably in a montage with no dialogue or brief mention, a “I want” song sung by the protagonist (Santa Fe), and the gilded cage: you’re trapped in this place, probably for your own safety. For me the film did no favor playing it safe by the book. Not one element or plot device used made a difference in how it all played out. In particular the dragged out ending which is similar to “We Are the Champions” by Queens if it only bragged for seven minutes repeating “No times for loser cause we are the champions”. The ending is similar to that minus the musical talents of Queens being replaced by off key singers by non professional young stars and poor musical composition, and sound arrangement from the adults putting it together. It should be noted that once a musical number ends the character act back to normal like nothing happened every time making even less sense when seeing our protagonist dance in the middle of the street despite wholeheartedly singing about his past struggles to reach his dream. Like the characters, it best to pretend choreographed musical numbers and songs never happened.

Christian Bale delivers a good performance. When not requiring to sing Bale brings some likability to Jack Kelly. Charming one moment and alienating the next swiftly conveying his character personal turmoil. He’s the only actor who manages to overcome the annoying New York accent making it a part of his character unlike the rest of the young cast where it’s a nuisance to listen too. Singing on the other hand Bale voice cracks going for the high notes. However, his crack voice works for his solo number “Santa Fe” showing off some good dancing skills. Bill Pullman is meh in his role, though among the most tolerable not having that New York accent to handicap him. Robert Duvall plays Joseph Pulitzer not making much of an impression. Duvall has little screen time and even less of a personality given the character he has to portray. At best Duvall is one note, though given how standard the role is written in this film there’s no way he would have pulled off anything interesting unless it was meant to be intentionally cheesy. The supporting cast has some interesting names from David Moscow, Luke Edwards, Trey Parker, Josh Keaton, and number of others that get tossed to the sideline. Their performances are average unable to deliver the more heavy side of the material with any emotion. Some of them are better singers than Christian Bale, but unlike Bale,when the supporting cast speak in their New York accent it can get annoying. Despite a good performance by Christian Bale the film is miscast. The characters we follow are meant to be children, but all have the appearances of teenagers going against the concept. As for the music it ranges from where the mute button like “Carrying the Banner”, to well that just happen song like “King of New York”, and finally to that was surprisingly good like “The World Will Know”. Hopefully among the few songs made for the film you’ll find one you’ll like because it’ll reuses some of them twice and about five of those musical numbers are performed on the same set despite having of a number of sets that perfectly captures its era. Dancing choreography while well performed, much in vein of the story is uninspired.

Newsies on the surface for me had the ingredients to hold my interest, but once Disney got involved attempting to mesh drama and musical together poorly it became tedious. Anyone who knows the Disney musical formula will find no surprises in this repetitive film that takes no risk nor executed in the manner to make it enjoyable. Even if the plot does interest you the characters are one dimensional cliche and so are the standard villains. Plotlines aren’t developed to support itself without a musical number to liven things up. The music is limited and generally badly sung while the drama side of the story tread familiar waters like it a commitment to the end. All in all, Disney tried something different, but at the same time it was afraid to do anything different ending up with a film with the worst qualities of the studio present for two noisy hours of boredom.