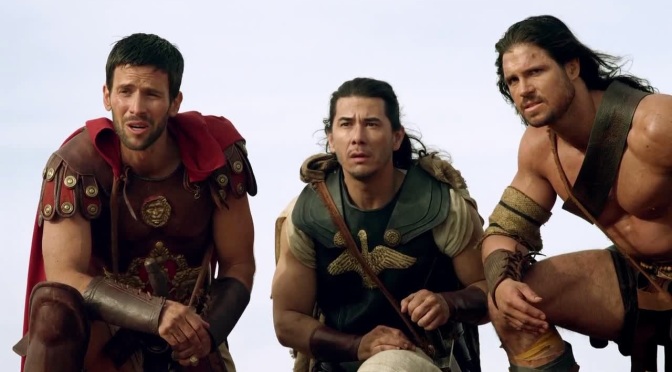 Earlier in 2014 a filmed titled “The Legend of Hercules” was released and it was absolutely terrible. Especially it leading star Kellan Lutz who was incapable of showing any personality and acting talent in the title role. If you were to tell me “The Legend of Hercules” was knockoff by “The Asylum” I would believe you, except “The Asylum” actually managed to make a better Hercules movie with significantly less money. The saddest part being if there was actually more effort put into it’s screenplay and production it could have been entertaining.

Hercules Reborn follows Arius seeking help from the mythical hero Hercules to save his wife and his town from it’s new maniacal king. Despite his name being in the title Hercules is not the film’s protagonist. Instead it’s Arius in a conflict that gets resolved in a by the number fashion. Protagonist power hungry mentor betrays protagonist by kidnapping his wife and killing off the current holders of power, protagonist goes to seek help from a famous character in the same job field to help him in his rebellion, but upon first impression in seeing the legendary figure is a pathetic drunk or in a pathetic state he loses some hope. Until a moment arrives to prove his identity in a situation requiring him to save the protagonist and the legendary character takes a chance to redeem their name to his/her former glory. Just giving that rough summarization on the first act is enough for experience film viewers and storytellers to predict how the film will play out. There’s no twists of any sort to the story that is dead set on a straightforward delivery. Like every character in the film Arius is unengaging. Characters are one dimensional so there’s not much to read into and motivations are strip down to the lowest common denominator. Everything is kept at a basic level simultaneously committing the screenwriting crime of being rush and lingering too much on something established. Whenever there’s any possible room for characterization it’s rush and whenever you’re given a scene where you know the purpose it’ll linger on it. Clearly that’s some backward thinking in screenwriting. That’s not even taking into account the story doesn’t take advantage of Hercules as a character. In the film, he’s not a demi-god going on fantastical adventure based on any of his famous stories. While the intention was clearly made to make Hercules more grounded as a character it’s a decision that horrifically backfires especially when providing no characters of any depth. If given more time to fleshed plot devices and characters the film would have had an okay story. With some developed characters it would made the predictable journey feel less dull and uneventful.

Now on this corner we hear there are stories that claim this man is a God, has the strength of twenty men, and is a nearly unstoppable warrior. The actor that plays Hercules is none other than John Hennigan, or as some wrestling fans might him as WWE Superstar John Morrison. John Hennigan is not a good actor when he has to speak, but the script he’s provided requires more of his physical mannerism than actual line delivery. Despite his physical appearance Hennigan understands how to play the pathetic aspect of his character usually stumbling whenever his character is drunk. His inability to maintain his composure when drunk helps with the illusion that maybe Hennigan is not that great of a warrior. He’s also convincing in his action scenes, though it would be nice if the director knew how framed or shoot an action scene. Hennigan only falters in his line delivery, but his performance is above average since Hannigan knows how to portray the character on a physical standpoint. The only other actor that might register with viewer is James Duval (Frank the Rabbit from Donnie Darko) who gives a bad performance. He’s very off in his comedic timing and shares no chemistry with any other actor on set. Than there’s Christina Ulfsparre who’s nothing more eye candy on screen. Her scenes don’t amount to much aside from showing her in peril as the token damsel in distress. Finally Christian Oliver is the leading man and he’s bland. Oliver is given a typical role with little range to do show more emotion. Action scenes on the other hand are all terrible. In every single action scene the camera is way too close to making it difficult to make out what’s going on and the choreography behind the action scene is atrocious. Looking as if they were the rehearsal take instead of the actual finalize action scene. Adding to the bad action scenes is a shaky camera that makes it that much harder to enjoy an scene if in the faint chance you can make it something out of it. As for the editing, that’s also terrible with too many frequent cuts destroying any sort of flow in the action scene. Another issue is something I never expected to criticize. This film lack of extra hurts the grand scope it wants to pretend to have. The lack of numbers makes everything smaller, in particular to the ancient cities when depicting a crowd at most you’ll see on screen close to twenty. Although, knowing the studio history to be cheap it’s a surprised the location the film shot at gives off the ancient city vibe it’s trying capture.

Hercules Reborn is a knockoff and there’s no hiding that fact, but as a film it falls victim to being uninspired dull trite instead of an entertaining B movie “The Asylum” more often gets wrong than it does right. It could have been entertaining if more effort was put into it. There’s little for viewers of all kind to gain, especially those into B movies will find the film lacking inspiration in anything it does.