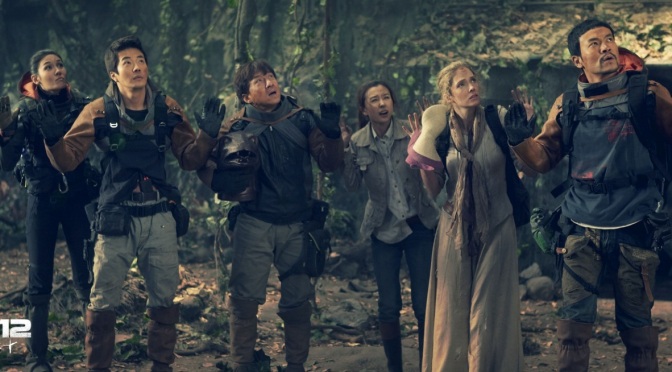 Chinese Zodiac follows JC search for the twelve bronze heads of the animals from the Chinese Zodiac. Aside from the protagonist name being JC (probably Jackie Chan does this kind of activity in his spare time) the story will not register a pulse. Literally the first action scene written into the film is just for the sake of it. What occurred in that action scene involving JC as a human rollerblade is never mentioned again. Speaking of which, it does attempt to developed it cast of characters albeit clumsily. At random characters will reveal bits of themselve when talking to each other during an operation which gets interrupted by contrivances or convenience. Development feels force as every plot device it uses to move forward makes it difficult to care when nothing is earned and resolved by luck. The dialogue ranges from steal this artifact, I hate your ancestors for stealing from us, we’re procrastinating doing anything evil to you for a comedic routine variety. All the while JC reiterates at several points during the movie the “great injustice and disrespect” the Western countries have shown to the Chinese in the past. This message is heavy-handed because of how often it’s brought up. One could look past the only Western representation is a stereotypical dumb blonde, but to solely act as if only one nation wronged China people does not help with it message of great injustice. I don’t know much about China history, but, um, remember Unit 731 screenwriters? I do and in case you do that’s because no one beats it over your head with how wrong it was.

For two acts the film goes for a lighthearted and comedic tone until the final arc which gears the tone to be more serious. Characters we follow that had no problem stealing rare artifacts for money developed a contrive code of honor towards the end. Yeah, because the same guy who has no problem stealing artifacts from the rich should really send the message that stealing is wrong. Chinese Zodiac takes a couple narrative inspiration from “Mission Impossible” globe trotting with some implausible gadgets (like the replica printer), the “Ocean’s Trilogy” team dynamics, and inability to balance action and comedy like “Once A Thief”. Failing to make the most of it settings to make it feel like a grand scale adventure, a bland team whose planning process before an operation is never seen, and succeeding in being unable to balance a tone. Writing is all over the place attempting to be many things failing to be a single good thing. As for which version you see really doesn’t matter. In the first cut I’ve seen that was fourteen minute shorter had rush pacing putting emphasizes on comedy with very little breathing to naturally develop the story. All the problems in the Chinese cut of the film are made more apparent, though it ends quicker.

Jackie Chan is the center of attention rendering the whole team dynamic a bit redundant. Chan carries the movie on his weight being the enjoyable goofball for two acts and going for serious in the final act. This role doesn’t challenge Chan to balance the comedy and drama like he master in previous films, but does a good job none the less. Supporting cast is decent, though mostly forgettable as comic reliefs to prolong one particular comedic action piece on an ancient ship. Action wise two of the film biggest set pieces are underwhelming at best. On paper Chan as a human rollerblade sounds exciting, but not so much in execution as in the way it was shot makes as if it was performed slowly. Another is a long set piece on ancient ship that is in favor to show comedic antics than actual fighting. Lasting allot longer than it needed too with added slapstick. The only worthwhile action sequences appear in the final forty minutes of the film. Allowing Chan use his environment against his opponent and fight against fighters that actually hit him. These fight scenes are reminiscent of Chan golden days since they stripped Chan of all his contraptions and unnecessary embellishment. Improvising with what’s ever around him with fast choreography combined with unique ways to take down his opponents. If these were the film final action sequences it would have ended on a high note in the action department. Sadly, there’s one in the uneventful climax involving four skydivers, and a volcano. On paper doesn’t that sound awesome, but in execution poor CG, slowly performed action, and no decent setup dooms it.

Chinese Zodiac comes across as a knock off of a good Jackie Chan film that just so happen to have the actual star in it. It’s story is uninteresting simply tossing an action sequence for the sake of it and sprinkling muddle characterization with little breathing room until the next plot devices rears itself in. On the action side the first half of the film is unimpressive or get interrupted by an overlong slapstick comedy routine. It has three good fight scenes two of which that serves to remind viewers of Chan’s skill as a fighter, but the climax leaves plenty to be desired. On a technical level there’s nothing much wrong with the film with the exception of few instances of bad CG. When there’s only three scene in a two hours movie that highlight it star true talent it’s stop being merely a bad movie and more a disappointment for fans.