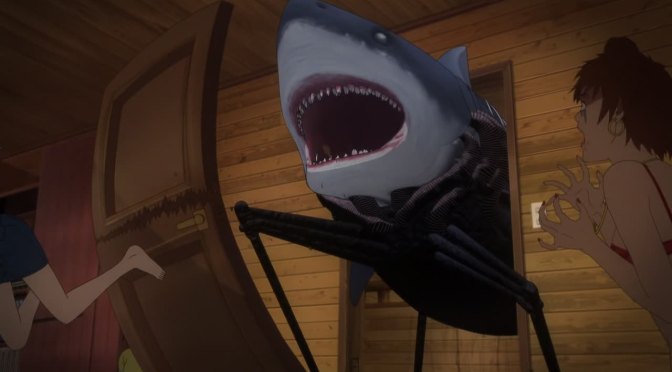 Films that have a run time that is below an hour and half are a risky endeavor. Usually the length of a film isn’t a solid indication of a film quality, but tell its audience how much of their time is either going to be rewarded or wasted on it. GYO: Tokyo Fish Attack falls in the category that is left for individual viewers to determine for themselves. As someone who enjoys seeing films with wacky premises both it strengths and weaknesses arrive from the writing.

GYO: Tokyo Fish Attack is follows Kaori and her friends vacation to celebrate their upcoming graduation, when suddenly an infestation of mysterious walking fish forces them to reevaluate everything they care about in order to stay alive. It’s a premise that demands very little thought and has even less intelligence. For starter it plays against following a single genre rules switching it up as it goes along. Starting as a slasher film, than turning into a siege film, a mad scientist film, and ending with post apocalyptic. As clever as the structuring might be keeping the story interesting with it different paths it corners itself when it comes to telling the story. Characterization is easily the weakest aspect of the film. Characters simply represent a shallow theme hardly building upon it for any meaningful insight. Attempts at genre riffing are made clear without anything clever to say about them simply acknowledging their existence. The lead herself plays against the damsel in distress by being the heroine of the film. This in turn also undermines giving her a compelling journey. The whole got to save my fiancee motivation is easy to get behind, but learning very little about the protagonist just makes her part of the scenery and without knowing much of heroine fiancee it questions if he’s worth fighting against a mutated spider-shark. Explanations on the question presented are intentionally left unanswered. Spending more on getting to the next set piece and less on developing it’s no surprise the explanation given are bizarre. Hinting at possibilities to an answer, but never confirming leaving it a mystery. Some will scratch their head, others will think nothing of it other than it was fun, but the intention to cause fear with the ending fails because of how it told was story.

Animation is passable at best. There’s no complicated sets, movements, or designs that makes it visuals leave much of an impression. Usually empathizing on facial expressions is done well even if the viewer and character feelings are different about the current situation. Leaving a lot to desire it moves smoothly. The 3D animated fish come across with mixed results. They work because they stand out an oddity against the hand drawn backdrop, but at the same time hardly integrated into the film. There are shots where dozens of 3D fish are roaming the streets although the lack of prominent screen time containing very few scene where sea creatures are attacking the city. Voice acting is decent granted the cast had shallow characters to work with. Given the roles the voice talent were given they come across as solid at best putting more emotion in a character that’s one dimensional.

GYO: Tokyo Fish Attack has a specific audience in mind alienating many by concealing its weakness. Having very little in terms of characters and not even bothering to build on its idea the intention is clear leaving little to experience in between. With no worthwhile investment to come from the characters, story, genre riffs, or it deluded execution towards it goal results from a film that leaves you empty handed.