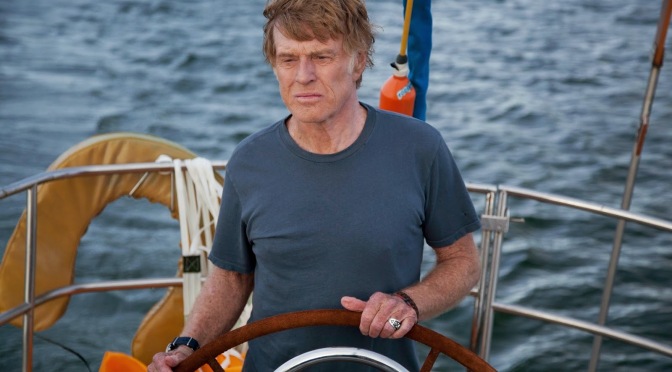 All Is Lost is about a resourceful sailor who finds himself, despite all efforts to the contrary, staring his mortality in the face of formidable storms at sea. About 150 words (a rough estimation on my part) are ever said in “All Is Lost” and a majority of those words are used wisely in the opening; a narration in which the nameless protagonist writes a letter to someone. Who this person is never is the true question, but rather how to interpret our nameless protagonist letter is. An important question that goes unanswered is a considerable flaw yes given it’s a key moment; however, the writing respects not only its sole character and his natural obstacles, but also the viewer. There’s no half baked back story, no narration, no force messages because it’s a story that does not need it. In the truest form it is a minimalist survival tale that details a man struggle for survival through his actions not words. What we see our protagonist do to survive, how we see him react to his obstacles, and why are convey expertly through actions. Through the protagonist action on his environment we understand his knowledge and through his reactions we understand his attachment to life. Never is a scene simply written, but created as an essential to be able to apply it themes and character’s struggle. What this film does perfectly is give us a character whose compelling to see his journey to the end and open enough apply ourself in his position. In all ways it’s expertly written developing its characters, exploring it themes, and containing multiple interpretations accomplished nearly in complete silent.

Robert Redford delivers a performance for the history books. A role so demanding physically and psychologically to the point that if done wrong collapses the film. So much depends on the audience being able to get inside the sailor’s mind without his needing to vocalize his thoughts. His perpetually weathered skin essaying experience and resourcefulness rather than tiredness and bitterness. Redford, then, needs to use his facial expressions and other means to keep us in the loop. Aside from a few spoken narrative sentences and we see his attitude oscillate between helplessness and determination. Redford is the tent-pole that keeps the film afloat with his battered visage, calm determination, and detachment from existence. From the calm opening shots through to the fragile end, the cinematography is exquisite, painting vistas that excite and threaten life. Shots taken from under the life-raft; schools of fish lyrically darting back and forth among the menacing activity of sharks, moonlight creating the only semblance of light in the inexhaustible darkness actualized the ordeal. The resonance and beauty of the accompanying music and atmospheric sounds of a moaning sound of a craft in distress, falling apart – accompanied by the slapping of the waves which can be both benign and harrowing depending on the weather’s temperament.

All Is Lost is the pinnacle of minimalist filmmaking. A film perfectly in tune that it doesn’t require the basics necessity of an average film to be multilayered and rich in studying its character. Defying traditional narrative conventions “All Is Lost” is an intelligently crafted film that expresses many things by saying very little.