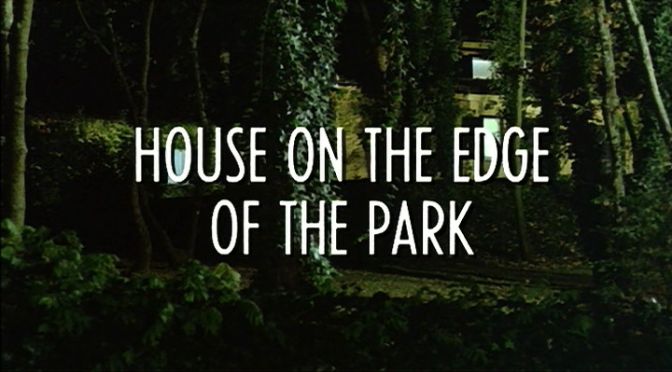 Ruggero Deodato name will forever live in infamy in the horror genre. Stirring outrage and countless debates with his most influential film “Cannibal Holocaust”. Challenging audiences stomachs on it contents becoming a film where someone else thoughts on the film won’t tell you if you’ll like it or not. “House on the Edge of the Park” comes across as the polar opposite being insultingly boring with a twist ending that attempts to justify the lack of characters, nonexistent narrative pretext or context, and nothing validating it should even exist.

House on the Edge of the Park is about two lowlife punks inviting themselves to a party holding everybody there hostage. Beginning the first two minute of the film with a rape scene is manipulative. For starter the film tells us nothing about the rapist, nothing about his victim, nor even establishes our location in the story. Since we know nothing about the rapist we immediately must hate him because the first thing we see him do in the film is rape an innocent woman. This opening is cheap solely created to make this character despicable. The rest of the film is constructed in similar fashion. Characters are introduced with an intent to be innocent, to be unlikable, and downright questionable. It’s plot is so thin I’m having a hard time thinking of an object thinner than the plot to compare it too. Characters do not receive basic development, only have one characteristic, and a singular purpose in the story. We don’t receive a single character instead we get artificial beings more intent to fulfill a mundane function. Carrying over with tropes from the horror genre there dumb character choices, opportunity to escape that aren’t taken, villains despite causing a ruckus does not cause any suspicion to neighbors, and the final nail a twist that downgrades already bad material. All the while nothing in the plot is ever elevated. Becoming even more underwhelming with each passing minute.

The clear intention of the film is to disturb the viewers, but with abysmal writing that intention is never realized. With nothing to latch on to the actors don’t earn any sort of sympathy or hatred. How could David Hess come off as menacing when being force to utter dated phrases like a “It’s too late to boogie” is the we most ever learn about him. Also working against him is the fact the film tells very little and what it does tell us is made up on the spot. Leading to David Hess to awkwardly transition from playing a creepy nice guy too clumsily impersonating what acting is. Having nothing work with regardless what the actors do nothing is convey across aside from pure boredom. Music is used to play a theme what the rapist that what he’s doing is seen as innocent in his eyes. In a much better movie this is would come across as a disturbing insight, but here it feel tacked on even though it clearly not.

House on the Edge of the Park is more thinly plotted than air itself, contains horrendous acting, and a sense of astonishing loathe from gaining nothing from it. It’s neither thought provoking, disturbing, competently made, but it is a piece of filmmaking that’s easy to avoid.