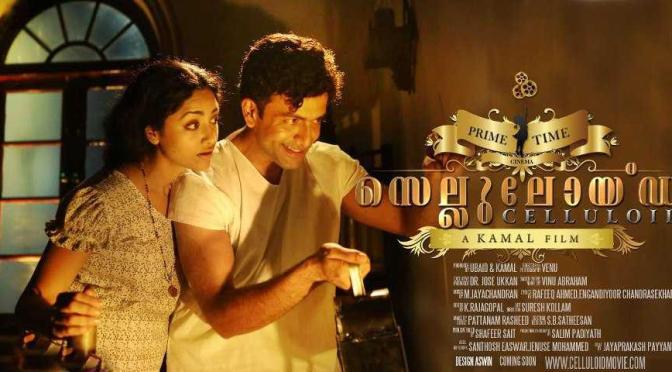 History and time are bound to lose or completely forget important pieces and people that had a hand in a major contribution. That sad truth also applies to films; for every classic film enthusiast know about, there is bound to dozens of hidden gems just as good or even superior that don’t share th-e same spotlight. In the case of “Celluloid” it’s a person by the name of J.C. Daniels who name was almost to history. J.C. Daniel life story is not a story that will fascinate film enthusiasts, but one that shares the passion for films as much the audience does.

Celluloid tells the story of J C Daniel, who made the first ever Malayalam film ‘Vigathakumaran’ in 1928, resulting in his exile and eventual downfall. Its linear narrative structure spends the first half chronicling the production of “Vigathakumaran” while the second half chronicles the aftermath of the film’s production. Tonally the two halves could have created an uneven shift, but is well handled that the tonal shift is not jarring. Its usage of humor in the first half is subtle always being the background while the true heart of the crew behind the film is on the forefront. You’ll get a detailed depiction of the film’s production and its aftermath alongside knowing the people who made it and their struggles during production. It’s as much a film about the making of “Vigathakumaran” as much as it is about life itself. Themes such as chasing difficult dreams, facing class discrimination, losing yourself in your art, your passion destroying you, and many relatable themes that are easy to connect with. The film never paints the film crew as ever being significant themselves, but seen as average people like the common film lover. Liking them for their passion and good spirit. As a standalone film it could be seen as a film about chasing dreams and as a biopic teaches the uninitiated about the “Father of Malayalam Cinema”. J.C. Daniel story is one film lovers will easily get behind. You have an youngster burning passion for the art of filmmaking wanting to make a film. His journey is fun, inspiring, and tragic. Much like a great film J.C. Daniel story becomes more than a film to watch and more of a reflection one’s similar passion towards their dreams filled with well developed characters and story that’s easy to identify with resonating to film lovers on a personal level.

Prithviraj Sukumaran comes up with a stupendous performance as the young and ambitious Daniel as well as the old, ailing and resigned version in later years. Looking and behaving like the actual J.C. Daniel capturing the psychological turmoil that Daniel goes through in the later years of his life with great competence. Mamta Mohandas, who essays the role of Daniel’s wife, gives a fine performance as the supportive and later suffering better-half. The innocence that spurts out of the corner of her lips as they stretch into a hesitant smile defines the person that Rosie must have been; unimaginably daring and yet immensely terrified. Sreejith Ravi and Century Jayaraj give commendable support as Daniel’s friends who aid him in making his dream come true. Chandni gives a stunning performance filled with naiveté, excitement, anxiety and genuine curiosity for this never-before-seen phenomenon called Cinema. Her innocence and wonder at her new surroundings practically leaps off the screen. Venu’s cinematography and art-direction by Suresh Kollam contribute a lot towards recreating the past in the best of manners. Editing by Rajagopal is also good. Anyhow, it’s the cinematography and the art-work that require special mention taking back into the audience back to Travancore of the late 1920s and late 1960s, thanks to the able support rendered by all technicians involved. M Jayachandran has come out with music that gives us an old-time feel. There may be some who’d vouch against songs in a bio-pic like this; but there is no point denying the fact that the songs do add to the appeal of the film as a popular and commercial venture that don’t hamper the flow in any way.

Celluloid is a passionate film about the art of filmmaking and a reminder how it could be a lost treasure. Touching upon the importance of preserving a film no matter if the majority hate it and giving respect to those who deserve it. It’s a film that will make you laugh, that will inspired, make you sad, and give a sense of accomplishment that an important figure wasn’t a mere footnote in history. No matter how insignificant his impact is known to the world the same could be apply us. However small our influence is those inspired by us will leave a big impact to strive for better things.