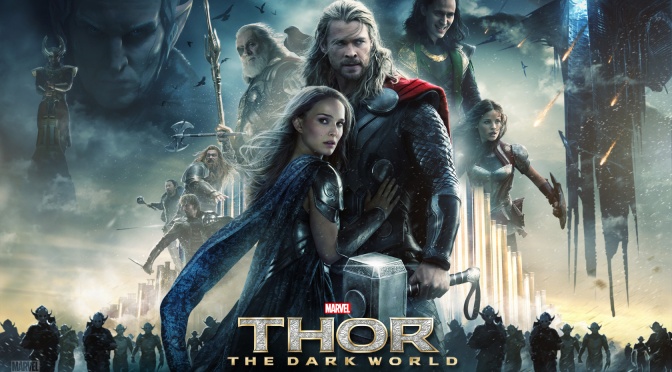 When it comes to Marvel Thor is among the most difficult character to connect with. The fact he’s a god is not major pitfall compare to how he is written and the people he interacts with that play a bigger part when investing into his story. Ironically the film has a character called Bor(e) in the prologue and despite appearing to hold importance much like everything else it all feels hollow rushing to reach the finish line without a proper treatment or care for anything it does.

Thor: The Dark World tells the story of Thor embarking on a journey to save Asgard, Jane Foster, and Earth against Malekith. This sequel suffers the same issue present in the original minus a worthwhile story to tell. Thor is intact being the overly powerful, but dumb hero whose unsympathetic. His motivation is easy to get behind, but the character himself and those around him never appear to be more than plot devices. Secondary characters serve only a specific function never branching out from that singular role. Some characters (if not all) are dedicated to expository dialogue, explaining the “Convergence” in case you weren’t paying attention the first three times it was explained, an introduced love triangle that quickly dissolve, and comedy relief that manages to become more heroic than the god of thunder. It submits to its heroes limitation in a uneventful manner. For a film that drives Thor to defy rules in order to attempt the one he loves, battles breaking across the universe, and an ancient evil with advance weaponry capable of succeeding it never becomes epic. Already mentioned are the lack of characters worth investing in and applying that notion with the villains. A superhero film is beyond repair when the main character evil brother has less screen time yet is a better thought out character. He unfortunately is undermined as a plot convenience with his powers usually in use in order to avoid a difficult narrative path. Because of this Thor life loses its weight in stakes tailoring to Thor limited capabilities instead expanding them. The same effect applies on the antagonist who has no imposing presence. The antagonist evil plan is generic, but even a generic plan is enough to support a villain if written well. Like everything else the villain is poorly written with not enough time to understand nor allow him to hold a position in the film. As a whole its a sequel that chooses to avoid anything difficult resulting in a film that not only fail to bring anything new to its world, but even further highlight the flaws of its universe in a rush pace.

Director Alan Taylor did a phenomenal job in the directing. Taylor created a detailed and well crafted world that feels connected together no matter how far it goes. His direction is the best part of the film whose talent is limited by a weak script that constraints his capable abilities. The action sequences regardless of size are unimpressive. CGI is not an issue as director Alan Taylor includes a large amount of explosions and proper framing following the action correctly, but what he cannot do is provide an investment from the audience. With the world inhabitant not receiving the same treatment as it carefully crafted universe action sequences are a hollow shell. Without characters worth investing the action set pieces are empty. Working against Taylor is having characters use sci-fi weaponry against medieval weaponry leaving little in terms of creativity. Close combat choreography is clunky and not well planned as actors perform them slowly or its either a one way thought in combat maneuvers to end the action sequence quickly. Performances are good all around, but end up being one note. Tom Hiddleston for example had potential to portrayed an emotional scene after learning tragic news, but because of the writing he does not get an opportunity.

Thor: The Dark World repeats past mistakes except this time on a empty larger scale. It is a prime example of bigger not always being better with a dimwitted superhero who never earns any sort of an attachment to match its equally dimwitted plot that expects it audiences to emotionally invest without the hard work developing anything it creates. Without question the production team, actors, and especially Alan Taylor were adequate enough to takes Thor sequel greater heights, but instead a weak, rushed, constrained script leads them to a course that only goes down.